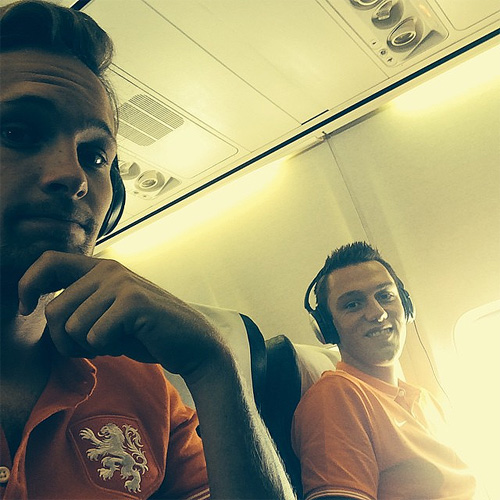 Daley Blind and Stefan de Vrij were no doubt swapping stories about their new clubs as the Netherlands pair posed for a photo ahead of their trip to Prague.

The Netherlands are set to face the Czech Republic in a tough Euro 2016 qualifier in Group A on Tuesday night as Guus Hiddink looks to make a winning start to his reign in charge of the Oranje.

World Cup star Blind is included in the former Chelsea manager’s squad after the 24-year-old completed a £14m move to United from Ajax in the summer transfer window.

Blind’s Netherlands team-mate De Vrij was linked with a move to Old Trafford as Louis van Gaal took up the reins of his new club, although a move never materialised.

Instead, the 22-year-old centre-half joined Serie A outfit Lazio in an undisclosed fee as Van Gaal signed Argentina international Marcos Rojo to strengthen his defence.

The Netherlands are joined by Czech Republic, Turkey, Iceland, Latvia and Kazakhstan in Group A.

Rooney: Unfortunately, Sterling is going to be a Liverpool star