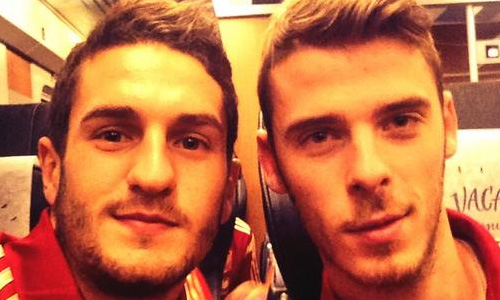 David De Gea has been spending time with his former Atletico Madrid team-mate Koke as Spain gear up for their opening Euro 2016 qualifier.

The 23-year-old Manchester United goalkeeper was handed a rare start as reigning European champions Spain suffered a 1-0 loss to France in their friendly on Thursday night.

Whilst De Gea may not have enjoyed the international break so far, the Red Devils man has been availing of the chance to catch up with old team-mates.

Koke, who made his Atletico debut 11 days before De Gea in September 2009, was heavily linked with a switch to the Red Devils last summer.

And United supporters will hope that De Gea was talking the 20-time English champions to the 22-year-old Spain midfielder.

“On the way to Valencia with the great @KOKE_32!” De Gea posted on Twitter along with the photo above.