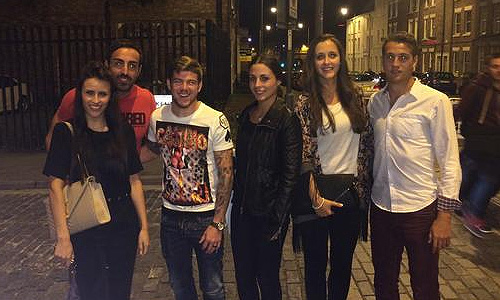 Jose Enrique helped Javier Manquillo and Alberto Moreno get over the disappointment of losing on their Anfield debuts by taking the Spanish pair for dinner.

The Reds suffered a surprise 1-0 loss to Aston Villa on Saturday evening after striker Gabriel Agbonlahor scored a first-half winner for Paul Lambert’s side.

Manquillo, who joined on loan from Atletico Madrid in the summer, started at right-back whilst £12m signing Moreno occupied left-back ahead of Enrique.

But he is clearly getting on with the pair despite the former Sevilla man moving ahead of the 29-year-old ex-Newcastle United defender in the pecking order.

Enrique, who was part of Liverpool’s squad that won the League Cup in 2011, posted a picture with Manquillo and Moreno plus their respective partners.

Enrique, who has never been capped by Spain, hasn’t featured for Liverpool since November after a long road to recovery following a long-term knee injury.