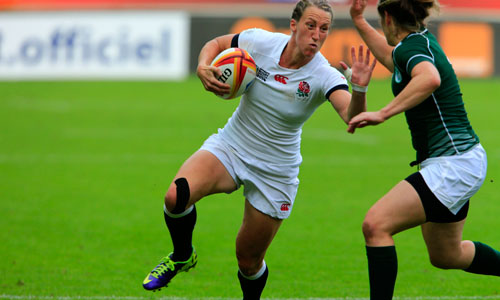 Worcester winger Merchant, who scored 44 tries in her 58-cap international career, is retiring on medical advice after sustaining several concussions during her career.

“While it is very disappointing to have to retire, I am hugely proud to be part of our World Championship-winning team and feel I have achieved what others never will,” Merchant said.

“I very much plan to stay involved in rugby as it is a sport I love. It is a sport that has given me so much and now I have the opportunity to give something back.”

Merchant made her debut against Ireland in the 2005 Six Nations, but as well as her impressive scoring return at 15s, she was also excelled at Sevens, going on to play in two World Cups in both forms of the game.

“Kat has been one of the greatest finishers I have ever seen in women’s rugby,” said England head coach Gary Street.

“Her athleticism, speed and power has set her apart from the rest. Her introduction to Test rugby underlined that when she scored three tries from just three touches of the ball.

“I have been working with Kat since she was just 16 and she has always worked incredibly hard. I am sure that dedication will be converted into a very successful coaching career.”

Saracens flanker Alphonsi, 30, enjoyed a stellar 11-year career as an England international, winning 74 caps and a record-breaking seven consecutive Six Nations Grand Slam titles, but will continue to play for her club side for the rest of the Women’s Premiership season.

“I’ve been fortunate enough to have had a great sporting career and feel it’s the right time to retire now that we are world champions,” Alphonsi said.

“There are so many great young players coming through, it’s now time for someone else to experience what I have been fortunate enough to have achieved.

“I have so many special memories playing for England but the best one was winning the World Cup. I can now certainly retire with a smile on my face.”

Wasps lock McGilchrist, 31, is also calling a day on her career after a 63rd international appearance in Paris since making her debut in 2007.

“It was a great honour to play for England,” McGilchrist said. “I have many fond memories but the highlight is, of course, winning the World Cup.

“The direction in which the game is now going is really exciting, as are the opportunities it will provide.”

The English Women’s Premiership kicks off this weekend with Alphonsi looking to lead Saracens to victory over Wasps at Twyford Avenue Sports Ground, while Emma Croker, Becky Essex and Claire Allan will be among the World Cup winners in the squad for reigning champions Richmond, who open their campaign against Bristol at the Athletic Ground.