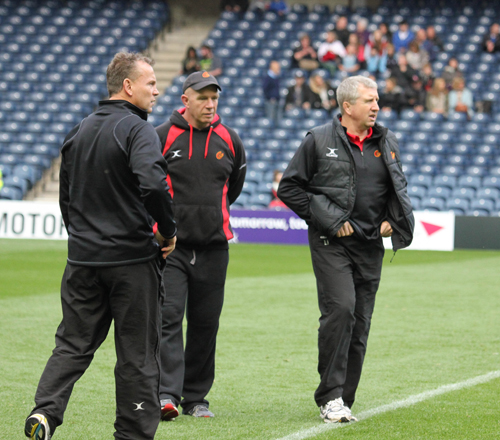 Lyn Jones insists that “nothing is impossible” as Newport Gwent Dragons prepare to take on French behemoths Stade Français in the European Rugby Challenge Cup.

After a dismal start to the Guinness PRO12 campaign, the Dragons director of rugby is hoping for an upturn in fortunes in a mixed-bag European pool beginning with Saturday’s trip to the Stade Jean-Bouin.

“What we have got to do is get to round six in a position where we have to beat Stade Français,” said Jones.

“To do that we need some sort of bonus point from the match on Saturday and nothing is impossible.

“We are excited about playing in a new competition and it’s about time we did well in Europe and got a bit of respect.”

Unlike the Dragons, Stade have made a promising start to their domestic season in the Top 14, sitting fifth in the league and unbeaten at home.

Such is their desire to succeed domestically, they have even opted not to register several of their star names, including Sergio Parisse and Pascal Pape, for Europe’s new second-tier competition.

But they still boast international quality with South African outside-half Morne Steyn and former Australia winger Digby Ioane among those expected to feature.

While Stade are overwhelming favourites to win the pool, the Dragons will fancy their chances of eclipsing Newcastle Falcons and Bucharest Wolves with the aim of securing at least one of the three best runners-up spots to make the quarter-finals.

“We are under no illusions about how difficult it is going to be to win, but it’s about going there, believing ourselves, and hitting our KPIs,” Jones added.

“If you do that you never know what can happen—it’s a funny old game.”

“We appreciate we are at the bottom of our game at the moment, but that can quickly turn around.”

Iain Grieve has no regrets over Plymouth Albion move