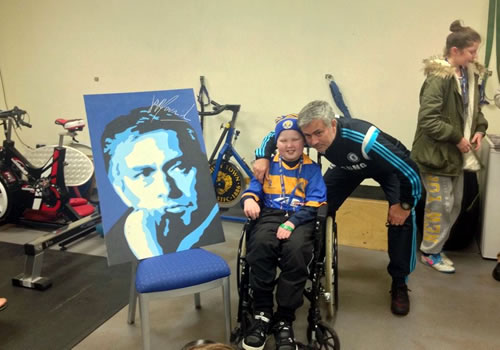 The Chelsea manager, whose side beat the Shrews 2-1 to reach the League Cup quarter-finals, took the time to meet 11-year-old supporter Lloyd Burton, who is suffering from cancer.

Lloyd is in a wheelchair having undergone chemotherapy on a brain tumour diagnosed in May last year.

The young fan completed an impressive paint-by-numbers portrait of the Chelsea boss, which Mourinho signed before kick-off during the League Cup clash.

The artwork is set to be auctioned to raise money so Lloyd, who may never walk again, can have his quality of life boosted with a lift installed in his house.

Lloyd Burton, #salop fan who's been fighting cancer, with his painting of Mourinho. #cfc manager will sign it tonight pic.twitter.com/JFaw5mzX0v

Photo: Liverpool’s Raheem Sterling all smiles ahead of Magpies trip

Photos: Balotelli and Gerrard share a joke during Liverpool training