Chelsea's central defensive duo appear to be in good spirits... 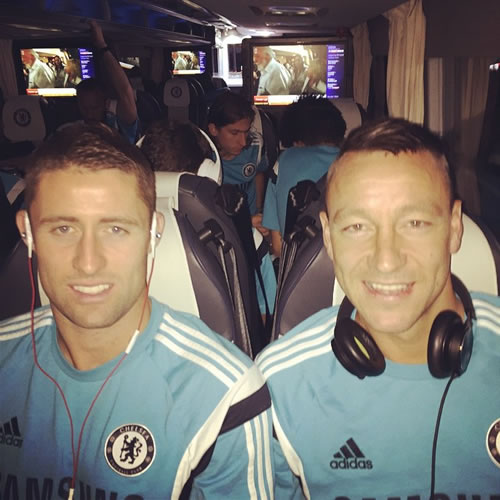 John Terry and Gary Cahill looked in good spirits as Chelsea took the coach to Shrewsbury ahead of Tuesday’s League Cup clash.

The Blues take on the Shrews at Greenhous Meadow in the fourth round of the competition as the two sides do battle for the first time since 2003.

And despite having played a gruelling Premier League game at Manchester United on Sunday, Chelsea defensive duo Terry and Cahill looked relaxed as Jose Mourinho’s men prepared for the clash.

Terry posted the picture above on Instagram and wrote: “Bus Journey to Shrewsbury with the BIG man for tomorrow’s game. Watching Homeland Season 4. #Cahill #capitalcup #2hourstogo.”

The Shrews have not beaten Chelsea since winning 2-0 in the old Division Two on New Year’s Day 1983.

Chelsea have won 13 and lost none of their last 15 League Cup games against lower ranked sides, a run that dates back to 1999.