Lock him in the toilets Carra! Liverpool legend posts photo of son and Real Madrid striker 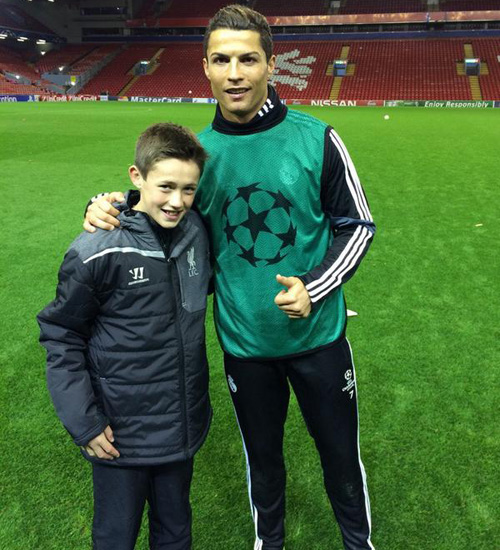 Jamie Carragher has attempted to show Liverpool’s defence how to man mark Cristiano Ronaldo after the centre-half’s son stuck tight to the Real Madrid legend during training at Anfield on Tuesday.

The Reds are set to face the Portugal international in the Group B encounter on Merseyside on Wednesday night as Brendan Rodgers look to get back to winning ways in the Champions League against the holders.

The retired Liverpool defender was part of Rafael Benitez’s side that were famous 4-0 winners against los Blancos in the quarter-finals in 2009, winning 5-0 on aggregate after Yossi Benayoun’s strike in the first leg.

And Carragher’s son, James, who is part of the Liverpool Academy, managed to catch Ronaldo for a photo as Carlo Ancelotti’s side trained ahead of their Champions League clash.

“He’s a player off the charts. His evolution in recent years, the way how he has become a goalscorer has been amazing,” Rodgers said.

“We need to know to stop him but there is danger in other parts of the field. You have (Luka) Modric, (Toni) Kroos – wonderful technicians who can play short, long.

“I’m also a big admirer of Sergio Ramos (another injury doubt as he has not featured since October 5) since his young days at Sevilla where he came through the system before making a move and then making to over 100 caps for Spain.

Jose Mourinho glances ahead to Chelsea’s clash with Man United