Everton appear to have a man advantage for their clash against Burnley after the club’s Twitter account named a starting line-up boasting 12 players.

Some may argue playing at compact Goodison Park is already an unfair advantage for the home side, but Everton rebranded football a 12-man game on Sunday afternoon.

Unfortunately for Aiden McGeady, he was the rogue inclusion as the winger takes to the bench despite his sparkling Republic of Ireland form. 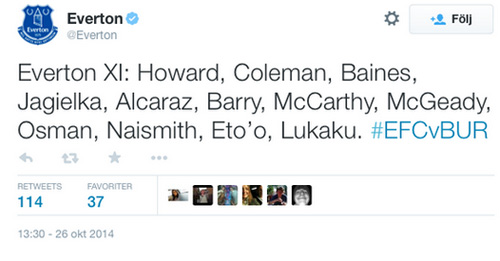 “I think they play as a team, they know each other really well, they’ve got really good energy. They’ve been able to play eye to eye against any team that they’ve faced already.

“They got a good draw against Manchester United at home and Sunderland. You’re going to get defeats in this league but they never stop competing.

“They got a really important point against Leicester showing that mentality and togetherness.”