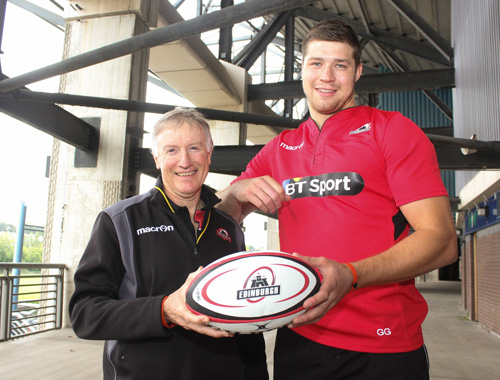 Scotland captain Grant Gilchrist has been ruled out of next month’s viagogo Autumn Tests after picking up an arm injury.

The 24-year-old Edinburgh Rugby lock was withdrawn after 28 minutes in their 25-17 European Rugby Challenge Cup victory over Lyon at BT Murrayfield Stadium with a suspected broken arm.

Clearly this is really disappointing news for Grant, who’s been a fine player and leader for his club this season

“It looks as if there are hairline fractures in both bones in the forearm,” Edinburgh head coach Alan Solomons said after the match

“However, we will have to wait for the full medical report for a clearer picture.”

Edinburgh’s third win a row, the first time they have achieved that since November 2011, was soured by the loss of five players to injury in the first half hour, after three players dropped out of the starting XV before kick-off.

Meanwhile Scotland international Dave Denton was given a 60-minute run-out rather than the expected 30 minutes as he continues his return from injury.

There was further bad news in the backs as centres Phil Burleigh (torn MCL) and Sam Beard (head knock) were also withdrawn.

A medical update released by the club on Saturday afternoon revealed that Watson will have an operation on Sunday with Grant also set to have surgery next week.

Gilchrist has seen a specialist who is reviewing his x-rays with a view to determining how to manage the injury.

“Clearly this is really disappointing news for Grant, who’s been a fine player and leader for his club this season; and was set to continue that role for Scotland this autumn,” said Scotland head coach Vern Cotter

“Despite being unable to play, he will still join and be part of the squad in camp tomorrow, and feature heavily in our preparations for the viagogo Autumn Tests.”

Jim Hamilton, the Saracens lock, will replace Gilchrist in the Scotland squad ahead of their four-day training camp in Newcastle, with Cotter reviewing his captaincy options ahead of the opening match against Argentina at Murrayfield on 8 November.

Watson, who was one of three players to be invited to train alongside the 33-man Scotland squad, has also been ruled out of the series. A replacement has not been named.