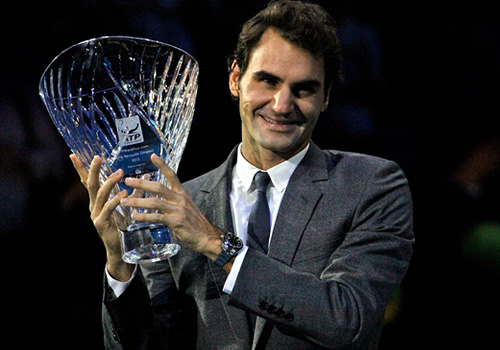 As the tennis season, featuring the elite eight players of the year, crescendos towards the ATP World Tour Finals in London this weekend, Roger Federer has proven, not for the first time and probably not for the last, that he is the man to beat not just on the court but also off it.

For while the most professionally significant of the ATP’s awards, the year-end No1, has still to be played out between Novak Djokovic and Federer at next week’s Championships, the other awards have already given the nod to Federer in two of the most popular categories.

Popular, because they are determined by fellow players’ and the public. And not content with winning the plaudits of his colleagues to claim the Stefan Edberg Sportsmanship Award for a 10th time, he has won a remarkable 65 percent of the public vote to win the ATPWorldTour.com Fans’ Favourite trophy, too.

And should anyone think Federer’s global popularity is the inevitable consequence of the 33-year-old’s longevity on the tour and durability in the rankings, he won his first Fan’s Award in 2003, the year he won his first Grand Slam at Wimbledon but before he reached the No1 ranking. And he has won it every year since, now 12 consecutive times.

The Federer style of play captivated tennis fans across the generations from the very start, but his continued popularity has much to do with his accessibility, win or lose. After practices and matches, at airports and hotels, he can be seen signing his way through huge crowds, shaking hands and posing for photos.

He admitted to thinking long and hard before taking to social media, but now his imaginative messages, photos and hashtags on Twitter and, latterly, Instagram have built that fan-base still further.

Such support undoubtedly gives him great pleasure, but the Sportsmanship Award must surely give him particular personal satisfaction. He has won the vote of fellow players every year since 2004 except in 2010, and this year’s takes him to twice the number won by the very man after whom the award was named.

Stefan Edberg claimed his fifth Sportsmanship Award in 1992, and the Swede became one of the Federer’s tennis idols. So much so that he approached Edberg to become his mentor a year ago—someone who would ‘inspire’ rather than coach the Swiss after a tough year of injury and losses.

It was soon clear that this was a tennis marriage made in heaven, both on and off court. Edberg’s famed serve-and-volley skill has suffused Federer’s game, and the Swiss man’s deft handling of fans and media has brought a smile to the Swede’s face.

Nothing could complete an eventful year for Federer better than winning the World Tour Finals and Davis Cup, or regaining the No1 ranking, but these two awards will undoubtedly mean the world to the popular Swiss.

Djokovic and Federer are still in contention for the year-end No1.

Bob Bryan and Mike Bryan: The Americans will finish as the No1 duo for a sixth successive year and a record 10th time overall. The 36-year-old twins won nine titles in 2014 including the US Open and six Masters.

ATP Star of Tomorrow awarded to youngest player in top 100

Borna Coric: The 17-year-old Coric began the season outside the top 300 and reached a career-high 92 this week. He made his Grand Slam debut as a qualifier at the US Open and beat Rafael Nadal en route to the Basel semis.

Roberto Bautista Agut: The Spaniard climbed from a year-end 59 to a career-high No14 in 2014. He claimed his first ATP title on the grass of ‘s-Hertogenbosch, won on Stuttgart’s clay, and reached the indoor Moscow final.
Other nominees: Marin Cilic, Nick Kyrgios, Kei Nishikori

David Goffin: The 23-year-old broke his wrist last September, started 2014 ranked 110, and ends this season at a career-high 22. Goffin has compiled a 44-4 win-loss record since July, including three Challenger titles and his first ATP title in Kitzbühel. After a third-round run at the US Open, he won titles at the Moselle Open and Mons Challenger and was runner-up in Basel.

Tournaments of the Year

Bob and Mike Bryan The Bryan twins received 45 per cent of votes to win for a record 10th time.

Andy Murray: Murray took part in two fundraising exhibitions for Ross Hutchins, now in remission from Hodgkin’s lymphoma, and Elena Baltacha, who died of liver cancer this spring. This autumn he appeared in “Andy Murray: The Movie”, a comic sketch during Channel 4’s “Stand Up To Cancer” fundraiser, and has also raised awareness for the work of UNICEF, United for Wildlife and Malaria No More.

Douglas Robson: Writes for USA Today, one of the largest American newspapers