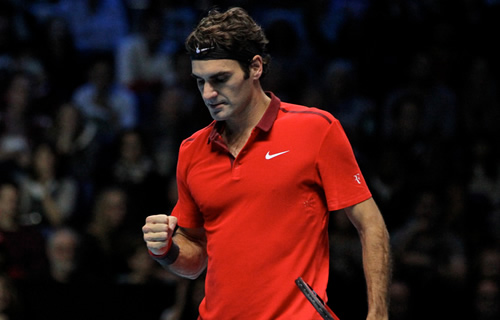 Andy Murray summed up the remarkable achievement of Roger Federer in not only reaching a record 13th straight season finale but being a serious contender for a record seventh title.

“The reason he’s so difficult to beat is that he’s so incredibly good on these courts,” he said. “He’s a fantastic indoor player, has been his whole career. He’s one of the most talented shot-makers, so when there’s no wind or sun to throw him, and he’s on his game, he’s extremely tough. And he has a great record in this competition, he obviously likes it.”

But Federer’s achievements and targets in London this week may not stop there.

The 33-year-old Swiss is also in the running to become the oldest end-of-year No1 in rankings history—though he faces a formidable task against fellow new father and top dog in London, Novak Djokovic.

After the Serb won the Paris Masters a week ago, the gap between them is substantial—Djokovic must lose most of his matches here and Federer win most of his if they are to swap positions at the top—but even so, Federer remains set to become the oldest player to finish the season in the top two.

Hard to believe, then, that he was ranked No8 as recently as March following a tough 2013 of back problems. Since reaching the final of his first 2014 tournament of the year, indeed, he has barely missed a beat, falling short of the semis in only one Grand Slam and short of the quarters in just one other tournament—and they were Roland Garros and the Rome Masters, little more than a week after the birth of his second set of twins.

However, his last loss was to the very man who fell into his group in London, the youngest man to qualify for his debut Championship appearance, 23-year-old Milos Raonic.

The big-hitting, big-serving, calm and smart Canadian has improved year on year, and in 2014 he won his first 500 title, reached a maiden Grand Slam semi-final and scored back-to-back top-five wins—one of them Federer—en route to his second Masters final.

Federer made it clear ahead of his opener that he was keen to right the Paris Masters ship: “Well you definitely don’t want to lose the first [match]. That puts you under pressure for the rest and you don’t know if it’s in your hands any more. So from that standpoint, you go out as if it’s a knock-out system and if you do lose one, it doesn’t feel like the end of the world, but it kind of is… First one is crucial in my opinion, and then go from there.”

Bold words in the circumstances, a week after his first loss to Raonic and two days before taking on the big ambitions of that same young man.

But as is Federer’s way, he was upbeat about it: “The good thing is, I’m not feeling badly. I lost because he played well, and you can accept that and react to it. It’s more up to me than him, but as I’m feeling good, I’m actually happy at the rematch.”

So, separated by a decade in age and experience, who would prove the stronger—physically and mentally?

In the first set, it was clearly the six-time former champion who had the edge. He held his opening serve with ease, broke in the second game, and quickly led 3-0.

Raonic looked tense, not surprisingly with a full house, 90 percent of it cheering Federer. The younger player seemed to settle in the fourth game, serving to love with three aces, but it was a false dawn. Federer spotted a couple of big first serves to fire some stunning returns for break point. Raonic aced but in the blink of an eye, Federer again had break point and forced the error for the set, 6-1. The Canadian had made only eight errors, but Federer had made only two.

Raonic tried to up his aggression in the second set, and it looked as though he would be rewarded. He was the first to save a break point, but then Federer barely survived in the fourth, fending off five deuces and three break points.

Now Raonic was holding his serve with greater ease: to love in fifth, to 30 in the seventh and ninth, and to 15 to lead 6-5. Meanwhile, Federer continued to fight to hold, attacking the net on break point in the sixth, and facing a set point at 5-6.

It was gutsy stuff from both, as Raonic tried to up the stakes with some net attacks of his own. But the fluid and explosive Federer was by far the more natural of the two moving forward and it paid off. He resisted the threat and they moved to a tie-break.

Against the run of the second set, though, it was Federer’s serving that dominated, helped along by a sequence of edgy errors from Raonic—a double fault mid-way through the game—and the end was quick and clean, a Swiss sweep to 7-0 and the match.

He admitted the second set was not as straightforward as it should have been: “I think I played really well for probably one and a half sets. [Then] I had a couple of games where I was up 40 0 up, and both times he came back and got into the game, which was probably my mistake. But it made me uncomfortable. I started to play a bit more passive. He started to become a bit more offensive. I actually think he was the better player from that moment on and deserved the set more than I did. Thankfully he didn’t play quite so well, like he did in Paris maybe. He gave me a few shots here and there, especially at the beginning of the breaker. I think those were crucial.”

Revenge will surely be sweet, but Federer, now with 45 match-wins at this prestigious tournament, will not be focusing on that. Rather he will be pleased at his form, fitness, serving and, perhaps most important, his resilience under pressure. He saved all four break points he faced.

He next plays Kei Nishikori on Tuesday before taking on Andy Murray on Thursday. Both have even head-to-heads against him—Murray 11-11, Nishikori 2-2—but Federer looks hungry, and he looks very determined to reach the Championship semis for a 12th time. 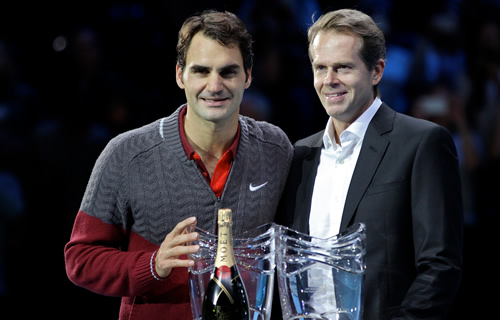 Footnote: Federer was presented after the match with the two ATP Awards that he won earlier this week. His mentor, Stefan Edberg, was on hand to present the Sportsmanship Award named after him—though Federer has now won it 10 times to Edberg’s five—and the Fans’ Favourite Award for the 12th consecutive time.