Jurgen Klopp says he has unfinished business at Borussia Dortmund

Jurgen Klopp emphasised that he was planning to enjoy his “holiday” as Borussia Dortmund travelled to London to face Arsenal.

While his contemporary Arsene Wenger is under pressure after Arsenal’s disappointing start to the season, Klopp is under real pressure at Dortmund.

The 47-year-old’s side are 18th in the Bundesliga after letting a two-goal lead slip to draw 2-2 with minnows Paderborn on Saturday evening. Sound familiar, Arsenal fans?

Unsurprising, then, to hear Klopp speak about his relief at a Champions League getaway, particularly as Dortmund are top of Group D, having already booked their place in the last 16.

“Tonight, I can’t change the Bundesliga situation,” he said. “It is little bit like a holiday for me. It is only the Champions League. But Bundesliga, we go back to that on Sunday.”

While Arsenal fans will bemoan Jack Wilshere’s latest injury setback, their problems are trivial in contrast to Dortmund’s injury epidemic after their own swashbuckling midfielder Marco Reus suffered a fresh blow on Sunday.

Wenger has often frustrated Gunners fans with his guarded responses to inquiries about Arsenal’s fitness problems, but Klopp was happy to indulge the media in a discussion about Dortmund’s never-ending injury crisis, throwing in a German metaphor for good measure. 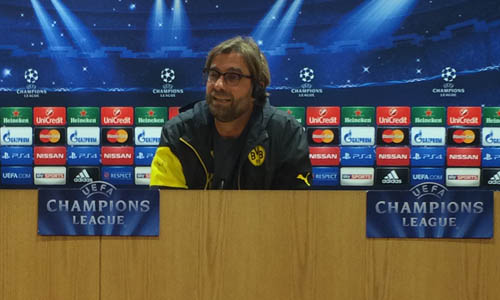 “We have an explanation in German: Alles hat eine ende nur die wurst hat zwei (Everything has an end except for a sausage [and Wenger’s Arsenal reign], which has two ends).

“With injuries, they start to play and the next thing, [there is] another problem. If you look at Marco Reus, all the injuries are because of that. It is a problem for the players with no injuries, too, because they have to play all the time.

“I can’t have a squad with 45 players. It is not a problem with training. We didn’t get silly over the past year. We know how to train.”

Klopp has earned cult status since he mastermind hip Dortmund’s back-to-back Bundesliga titles in 2011 and 2012 before he led the club to their second Champions League final a year later.

While Wenger is blinkered when it comes to Arsenal’s failure to build on baby-steps forward, Klopp, refreshingly, accepts full accountability for Dortmund’s current situation.

His willingness to take responsibility has kept Dortmund supporters fully behind their coveted manager, and his charm helps, too, which was very much on show at Emirates Stadium on Tuesday evening. Perhaps even a manager as experienced Wenger could learn a thing or two from Klopp.

“I feel maximum responsibility for this because it is easy to celebrate victories together, it is easy to feel responsible for winning games,” Klopp continued.

“It is much more difficult to handle this feeling now because I am responsible, of course. Sometimes I make mistakes. All the faults together is my responsibility, for sure.”

Klopp has been linked with Brendan Rodgers’s position at Liverpool in recent days, while some Arsenal fans have called for the German to replace Wenger.

Amid all the caricaturesque glances, a look of steely determination spread across the affable manager’s face when asked about a move to the Premier League.

For now, Klopp is content with one of the biggest challenges of his managerial career. To put it in his own words, he has “unfinished business” at Dortmund.