England vs South Africa: 10 things you need to know 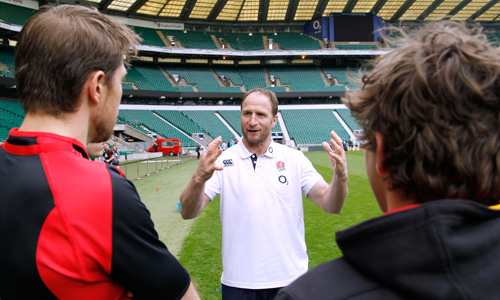 Who’s the man with the whistle?

Kiwi referee Steve Walsh of the Australian Rugby Union is the man in the spotlight – the 18th time he will have taken charge of the Springboks, who have lost just once with him in charge.

France’s Jerôme Garces and New Zealand’s Nick Briant are Walsh’s supporting actors on the touchlines, with another Frenchman, Eric Gauzins, providing TMO cameos from the truck.

England: Just the one change to the starting XV for the Red Rose as Bath Rugby’s Anthony Watson replaces club team-mate Semesa Rokoduguni on the right wing, as he did when the latter went off injured last week. It will be Watson’s first senior England start. Harlequins’ Marland Yarde takes Watson’s place on the bench.

South Africa: A bit more activity from the Springboks as head coach Heyneke Meyer wheels out the rotation policy. Half-backs  Handre Pollard and Francois Hougaard are dropped to the bench so Pat Lambie gets a rare start at outside-half with Cobus Reinach winning his first start at scrum-half.

JP Pietersen comes in for Cornal Hendricks on the right wing in the only other change to the backline.

In the forwards, Adriaan Strauss is preferred to Bismarck du Plessis at hooker, while the final change sees Schalk Burger replace Oupa Mohoje at openside.

Strauss, Lambie and Pietersen all started in the Springboks’ last Test at Twickenham, two years ago

Who are the players to watch this week?

England: All eyes last week were on Semesa Rokoduguni and this week they are firmly on what 20-year-old Watson can do on the international stage. He has shown his attacking nouse and speed in the Aviva Premiership, but he has to answer the question of whether he can deliver for England. Not short of confidence, but he has to deliver early doors, particularly in defence. Perhaps fortunate to get the nod ahead of Marland Yarde, who has more big game experience.

The blockbusting moves may come from the exceptional attacking prowess of both back threes, but the game is likely to be won by the forwards. Captain Chris Robshaw and Tom Wood will have a battle royale at the breakdown today and they need Robshaw to be on top of his game, especially with opposite number Schalk Burger back in Springboks colours.

South Africa: Duane Vermeulen was named on the IRB player of the year shortlist this week and the typical South African number 8 will take the game to England giving an inch of space. Expect him to be a menace at the breakdown, bring plenty of power in contact, and attack the gainline at will. He’s one of the best forwards in world rugby this year. and will be keen to justify his inclusion on that shortlist.

Sharks half-back duo Pat Lambie and Cobus Reinach have a big job to do. Last week, the Boks struggled to control the game, and it will be a big ask for Reinach to hit the ground running against England at Twickenham. There will at least be a solid understanding between the pair and they need to deliver quick ball to get dangerous runners Bryan Habana, JP Pietersen and Willie le Roux attacking England.

What do the teams make of this match?

England head coach, Stuart Lancaster: “Collectively I want to see 10 per cent improvement in everyone because that’s the difference between winning and losing at this level.

“When you are competing against teams ranked above you that’s where you really understand every mistake does matter.

“That’s why this series is so important in the build-up to the World Cup.

“Irrespective of what happens, I will know by the end of this series who can and who can’t.”

South Africa head coach, Heyneke Meyer: “Ireland was one of those strange games – we won everything except on the scoreboard.

“The result was a wake-up call for me as a coach and for the team as well.

“There’s no shame in losing, but I was ashamed by our performance. We can’t make the same mistakes again.

“You don’t have to motivate the guys against England. They know it’s a huge challenge, and they know there’s an unbelievable heritage going back so many years.

“This week we don’t have to say anything – we know the players will be motivated. It will be an unbelievable atmosphere, a real pressure cooker.”

How did they get on last time out?

England: The Red Rose lost 24-21 to the All Blacks at Twickenham despite going ahead early through a superb Jonny May try.

South Africa: The Springboks were disappointing in Dublin as they lost 29-15 to Ireland, needing a last-minute JP Pietersen try to make the scoreline respectable.

Anything else I should know?

Stuart Lancaster is winless against the Springboks since taking charge in 2012, but England’s losing run stretches back even further, to 2006 when Phil Vickery’s try seven minutes from time was converted by Andy Goode.

South Africa will remain second in the IRB world rankings on Monday regardless of the result, but England can reclaim the third place they lost to Australia last week if they defeat the Springboks and Australia lose to France in Paris.

There is no shortage of experience in this Springboks 23. The starting XV boasts a total of 778 Test caps, with a further 233 caps worth of experience on the bench.

What happened last time they met?

The sides last met on 24 November 2012 at Twickenham with the Boks winning 16-15 through a Willem Alberts try and 11 points from the boot of Pat Lambie.

What do the bookies make of the match?

Despite no win over the Boks since 2006, England begin the match as favourites.

Our man Paddy Power is offering England at 8/11, South Africa at 6/5, the draw at 18/1. Odds correct at time of writing and subject to change.

Wales vs Fiji Preview: 10 things you need to know