Hernández: Argentina looking to build on Australia win against Scotland 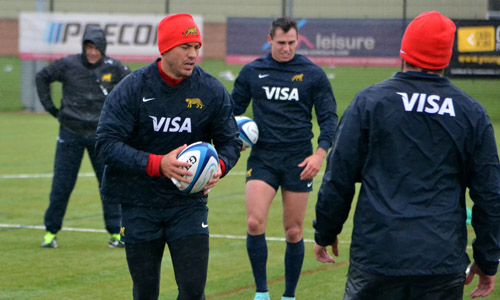 Juan Martín Hernández has urged his Argentina team-mates to build on their momentous 21-17 win over Australia last month when they face Scotland on Saturday.

The 32-year-old Toulon utility-back, who lines up in the centre, reaches a personal milestone with his 50th cap this weekend, but the Pumas star is more focused about the team’s performance as they look to maintain their winning record in the Scottish capital.

Having played like we did in the Rugby Championship, it gives us a responsibility to keep playing well

“I’m not really thinking that the game is my 50th,” Hernandez said. “I think I will only do that once I retire.

“Now, this next game is important for the team.

“We have some good dynamics behind us following the Rugby Championship and this Saturday we want to continue in the same way.”

Daniel Hourcade’s side is packed with Europe-based talent and go into the match on a high after securing their first Rugby Championship win last month, which propelled them back into the IRB world ranking’s top 10.

Argentina’s record at BT Murrayfield Stadium is impressive with four wins in five visits, their only defeat coming on their first visit to Edinburgh against Scotland’s Grand Slam-winning vintage of 1990 as they were hammed 49-3.

On that day, two pairs of brothers were prominent for the Dark Blue as Gavin and Scott Hastings started in the backline, the former crossing for a try in addition to adding five conversions and a penalty. Kenny Milne, whose brother Iain started on the bench, also got in on the try-scoring, crossing for two scores.

Other brother combinations have been and gone for Scotland, but the new era sees second row brothers Richie and Jonny get their first opportunity to represent Scotland together on Saturday.

Should they need inspiration, there is a rich vein of history for the Gray brothers to draw on, but Hernández and his Pumas team-mates are hoping to spoil their party and avenge June’s 21-19 defeat in Córdoba.

“Having played like we did in the Rugby Championship, it gives us a responsibility to keep playing well,” Hernández added.

“We do not want to step back in terms of the game. On Saturday, we must impose our game and not let Scotland dominate.

“If the weather permits, and we can keep the ball, it can be favourable to us, but if they start to fight back we could be in trouble.”

Warren Gatland: Wales have to be more clinical

Paul O’Connell: Springboks have added to their physicality