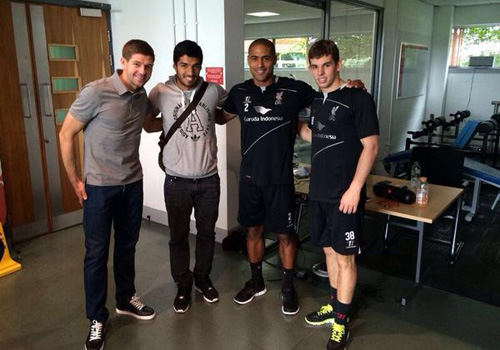 Luis Suarez has thanked Liverpool captain Steven Gerrard for talking the Uruguayan out of a move to Arsenal.

The 27-year-old ended a three-and-a-half year stay at Anfield this summer after completing a £75m move to Barcelona from Liverpool in July.

However, Suarez came close to joining Arsenal in last year’s summer transfer window after the Gunners made a £40m and £1 bid for the striker.

But Reds captain Gerrard managed to convince Suarez to stay at Liverpool for another season, promising that a big club would make a move for the 31-goal forward this summer.

Speaking his new book, Crossing the Line, Suarez said: “It would have been a big error that I would have made had it not been for Steven Gerrard. We spoke about this when I went to Melwood to pick up my things at the end of the summer and he said: ‘You did the right thing, you waited until the best moment.’

“He had told me to play well for Liverpool, give it another year and it will be Bayern Munich, Real Madrid or Barcelona coming for you and then you can go where you want, because you have the quality to play at any of those three clubs.”