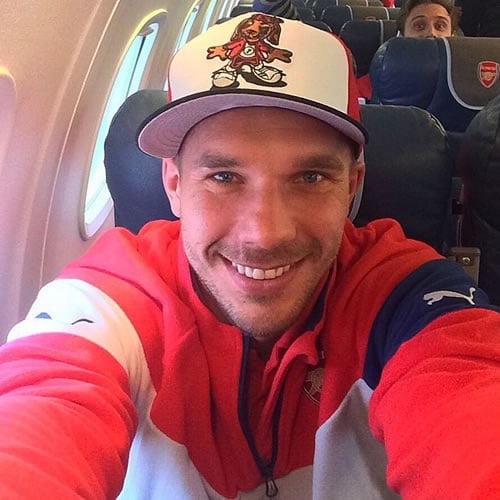 Nacho Monreal may have come in for plenty of criticism following his disappointing performance during Arsenal’s 3-3 draw with Anderlecht in midweek.

But the defender appears to be upbeat ahead of Sunday’s trip to Swansea City after he cheekily squeezed into the top of Lukas Podolski’s selfie.

Arsenal were preparing to fly to Wales ahead of Sunday’s clash at the Liberty Stadium.

And Monreal, who was deployed at centre-half at Emirates Stadium on Tuesday, was pictured sneaking into Podolski’s picture on the plane.

Podolski didn’t seem to notice, as he posted the picture on Instagram and wrote: “Travelling with the big dog cap. #Poldi #cap #aha #Dog #MyDog.”

Earlier, Jack Wilshere posed for a picture with Podolski and Alexis Sanchez ahead of their flight to Wales.

Juan Mata: Thankfully I changed the game for Man United