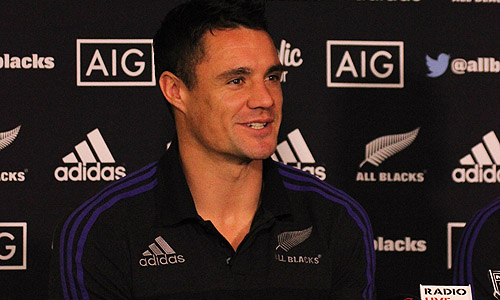 Dan Carter has warned that he is far from done as he prepares to make his first New Zealand start for 12 months on Saturday.

The 32-year-old All Blacks centurion will start at outside-half against Scotland for the first time since 16 November 2013 when he went off injured after 25 minutes against England.

I have to be realistic about my lack of preparation up until now, but I’ve had a couple of really good weeks in the environment and worked extremely hard

With one eye on next year’s Rugby World Cup, Carter plans to make his mark at BT Murrayfield Stadium in Edinburgh, as he did with three assists and 21 points when the All Blacks defeated Scotland 51-22 two years ago.

After a lengthy sabbatical, he returned through club rugby back home before rejoining his Crusaders team-mates, but international rugby’s leading points scorer broke his leg on 2 August in the Super Rugby final defeat to New South Wales Waratahs.

He then missed the All Blacks’ Rugby Championship title defence before making a 30-minute cameo against the USA at the start of November, but did not feature against in last week’s 24-21 win over England because of his lack of game time.

“That’s what I’ll be trying to do this weekend, to help the All Blacks get the performance we can be satisfied with.

“To get back to this position to be able to play for the All Blacks is a great start from me, but I’m far from done.

“I’m not happy with where I’m at; this is just an opportunity to grow and make the most of this moment.”

“I have to be realistic about my lack of preparation up until now, but I’ve had a couple of really good weeks in the environment and worked extremely hard.

“The fact I have haven’t played a lot of rugby this year, normally at the later stage of the season you find it a bit tougher, but with the lack of game time I’ve had this year I’m feeling fresh and excited.”

Carter, who had to prove his fitness in training before being allowed to join the squad on the flight to the USA, has seen Aaron Cruden and Beauden Barrett lead New Zealand in his absence, and has admitted he had doubts over whether he would add to his 100 caps or have lasting damage from his injuries.

“There’s been a lot of frustration throughout the year and doubt has crept in at certain periods,” he added.

“You have all sorts of doubts with your body when you’ve had injuries like I’ve had.

“That’s the biggest thing, rather than maybe in your darkest thoughts questioning whether you will put the jersey on again.

“That’s not the major one though, it’s more my body and things like that.”

Steve Hansen: No disrespect to Scotland but All Blacks have own agenda