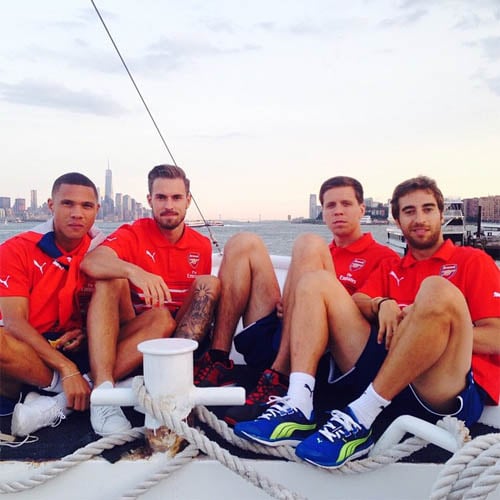 Aaron Ramsey was in reflective mood on Thursday as the Arsenal midfielder posted a photo from the club’s pre-season tour of USA.

The Wales international uploaded a photo of the midfielder alongside left-back Kieran Gibbs, Arsenal number one Wojciech Szczesny and no-nonsense midfielder Mathieu Flamini on a boat on the Hudson River.

The 24-year-old has endured a mixed start to the season, scoring two goals and making one assist in 10 Premier League appearances.

Wenger said: “Just keep the priorities right. A midfielder is a guy who defends well makes the other players play – focus on that.

“I think you have to be guided by not what people say, but the way you want to play and the [way the] game should be played.

“When you score a goal but have a disastrous game, people say you have been great.

“As a midfielder you have to keep the priorities right. Defend well, attack well and give good balls to other players. That’s basically what the game is about.