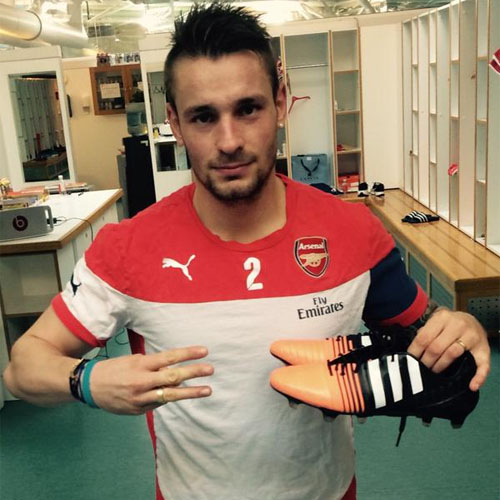 Mathieu Debuchy says he can’t wait to return to first-team action and try out his new football boots.

The Arsenal right-back is expected to be sidelined until late December after Debuchy suffered an ankle injury during a 2-2 draw with Manchester City at The Emirates in September.

The 29-year-old defender joined the Gunners in a £10m deal from Newcastle United in the summer transfer window, racking up four Premier League appearances before his setback.

And the France international took to Instagram to show off his new football boots, speaking of his eagerness to get back to regular first-team action for the Gunners.

“News #nitrocharge of @adidasFR looking forward to my return to action with !!” Debuchy wrote on Twitter.

Earlier this month, Debuchy revealed that he is aiming to be back in action for Arsenal next month.

“My injury is now better,” Debuchy said at an Arsenal Soccer School in Dubai.

“I work hard every day with the physio and I want to be back on the pitch in December. I’m looking forward to it.

“I was really proud when I signed for Arsenal and it has been frustrating getting injured so soon, but I am focused on coming back stronger. I am very positive about that.

“Training at Arsenal is an extremely high standard. I’m nearly 30 but I’m still improving by training with players who are of such a high quality, like everyone at Arsenal.”

Photos: Borussia Dortmund ‘warm up’ in Regent’s Park ahead of Arsenal clash