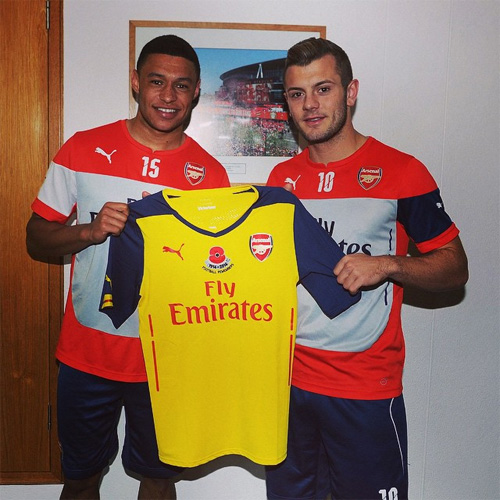 Jack Wilshere and Alex Oxlade-Chamberlain have taken to Instagram to pay tribute to those who made “the ultimate sacrifice” on Remembrance Day.

The Arsenal players held a minute silence with their Swansea City counterparts ahead of the Welsh outfit’s 2-1 victory at Liberty Stadium on Sunday.

But Oxlade-Chamberlain and Wilshere posted a photo of the Gunners duo holding a special commemorative Arsenal shirt on Tuesday afternoon.

Wilshere wrote: “Today we remember the ones who made the ultimate sacrifice! #LestWeForgot #11/11 #Wilshere #Chamberlain #Remembers”

The Gunners are sixth in the Premier League and a point behind fourth-placed West Ham United after their 2-1 loss to Swansea.

Arsene Wenger’s side, who were crowned FA Cup winners in May, have failed to win seven of their 11 Premier League games this season.