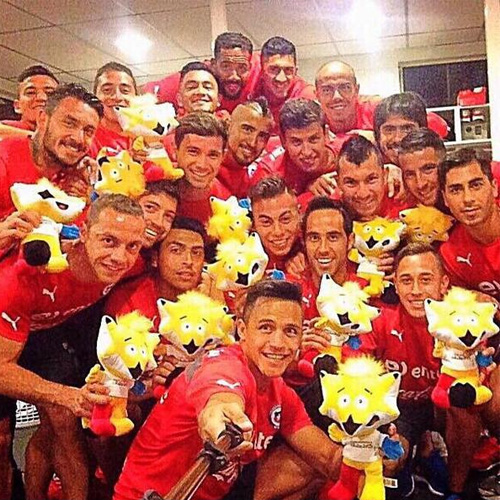 Alexis Sanchez has clearly enjoyed catching up with his Chile team-mates, orchestrating a selfie with his team-mates on Monday night.

The Gunners star caught up with Arsenal target Arturo Vidal on Sunday night after the forward enjoyed a sun-drenched barbeque.

And the Sanchez was up to more of his social media antics yesterday as he brought out the selfie stick to snap his team-mates.

Chile are set to host the Copa America next year, and Sanchez provided the tournament with some great publicity as the squad posed with competition’s official mascot toys.

The Chilean swapped Barcelona for Arsenal in a £35m deal this summer, scoring 11 goals in 15 appearances in all competitions this season.

Sanchez and Vidal enjoyed a well-earned barbecue on Sunday night after a 5-0 victory over Venezuela in a friendly on Friday night.