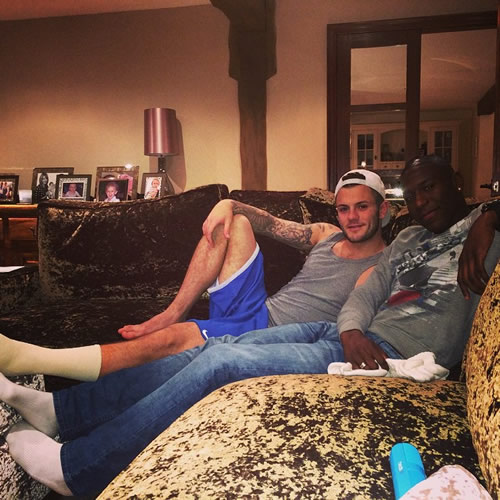 Benik Afobe paid a visit to Jack Wilshere’s home on Friday as the Arsenal midfielder began his recovery from ankle surgery.

The England international has been ruled out for around three months after going under the knife on Thursday.

Afobe, who is currently on loan to MK Dons from Arsenal went to visit the 22-year-old, who was pictured all smiles on his sofa at home.

Wilshere posted the picture above on Instagram on Friday evening and wrote: “Thanks to my boy @bennyjogo for coming to see me #TheLittleThings #Bromance.”

Speaking on Friday, Arsenal boss Arsene Wenger backed Wilshere to come back stronger after the setback.

“He’s very down – Jack is a football man who loves the game,” said Wenger.

“But on the other hand, he’s a very strong character as well and he has learnt to deal with adversity at a very young age.

“He always comes out stronger and when I spoke to him, the final sprint of the season is already in his mind. He’s a very strong boy.”

Photo: Man United stars Falcao and Herrera get to grips with Fellaini’s hair