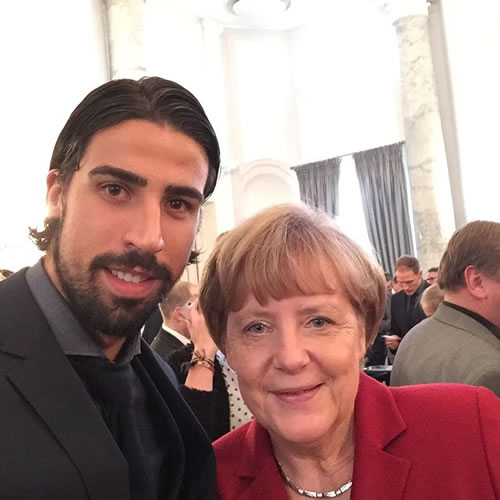 Sami Khedira has proved that Angel Merkel is down with the kids after impressively managing to take a selfie with the German chancellor.

The Real Madrid midfielder, who has been heavily linked with a transfer to Arsenal in recent months, snapped a picture with the politician and posted it on Instagram on Monday afternoon.

Khedira wrote: “What a memorable day in Berlin! Meeting our chancellor and fan #1 Ms. Merkel, our Federal President Mr. Gauck and getting ready for tonight’s premiere of “Die Mannschaft”!”

The World Cup winner was heavily linked with a transfer to Arsenal over the summer but a move to north London failed to materialise.

Speculation surrounding the 27-year-old’s future has been gathering pace once again as the January transfer window approaches.

Khedira is yet to start a league game for Madrid this season and has only made four appearances from the bench for Carlo Ancelotti’s men.

Where will Sami Khedira be next season?