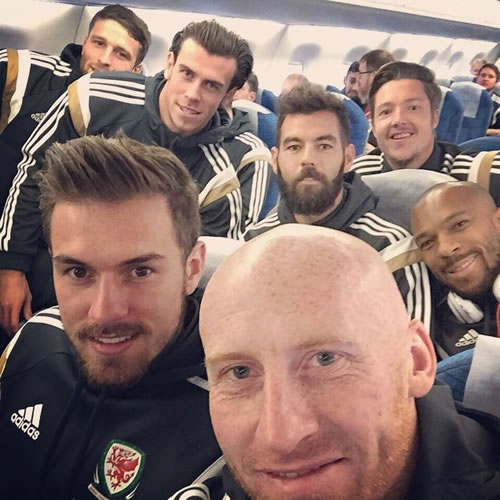 Aaron Ramsey was all smiles as he posed for a selfie with some of his Wales team-mates ahead of Sunday’s Euro 2016 qualifier against Belgium.

The Arsenal midfielder was pictured alongside Real Madrid star Gareth Bale and West Ham’s James Collins as Chris Coleman’s men travelled out to Brussels ahead of the clash.

The Arsenal midfielder scored his side’s goal as Wales secured a 1-1 draw with Belgium on their last trip to Brussels back in October 2013.

Coleman’s side are currently top of Group B on seven points, while Belgium are third after having taken four points from their opening two games.

Ramsey has scored two goals and made one assist in 10 Premier League games for Arsenal so far this season.

Have you been disappointed by Aaron Ramsey’s recent form?