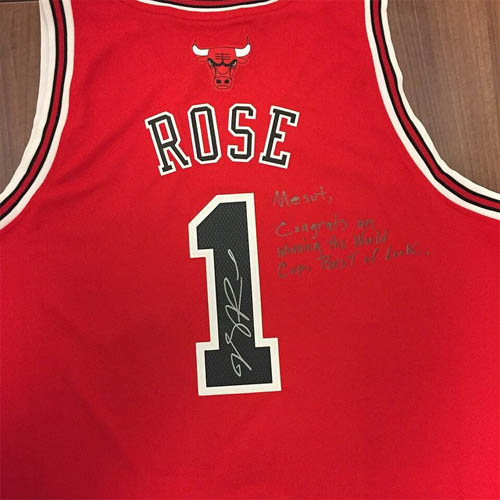 Mesut Ozil has plenty of time to work on his sports memorabilia collection as the Arsenal playmaker continues his recovery from a knee ligament injury.

And the 25-year-old midfielder appeared particularly pleased with a signed shirt from NBA star Derrick Rose, who currently plays for Chicago Bulls.

Rose, 26, is one of the biggest stars in the NBA, having been named the Most Valuable Player in 2011, the youngest-ever recipient of the award (at 22).

And Ozil, who helped Germany win the World Cup this summer, was keen to show off his signed shirt, as well as congratulate Rose on his Olympic triumphs.

“Thanks for the shirt @DRose and congrats on winning the World Cup, too,” Ozil posted.

Rose suffered an injury blow during the Bulls’s 114-109 defeat by Denver Nuggets on Tuesday night, coming off with a hamstring problem.