Ramires, Willian and Filipe Luis look are all smiles as Chelsea fly to Slovenia 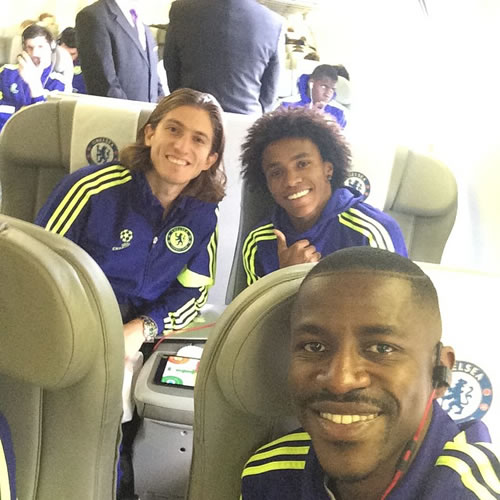 Chelsea’s Brazilian contingent looked in good spirits as the Blues prepared to fly to Slovenia ahead of Wednesday’s Champions League clash with Maribor.

Ramires squeezed into a selfie with compatriots Willian and Filipe Luis ahead of Chelsea’s flight on Tuesday afternoon.

Luis posted the picture above on Instagram and wrote: “Off to Slovenia. #Champions #CFC @chelseafc @willianborges88 @rami7oficial.”

Chelsea are looking to continue their fine start to the season with victory against the team they put six past at Stamford Bridge last month.

The 6-0 win left Chelsea with seven points, two ahead of Schalke, with Maribor a further three points adrift in third place.

The Blues are 15 matches unbeaten in 2014-15, winning 12. They have not lost since April’s Champions League semi-final second leg defeat at home against Club Atletico de Madrid.

Competing in their 13th group stage campaign and 12th in a row, the London side have won their section in eight of their last 11 campaigns, qualifying as runners-up in two other years.

How will Chelsea fare against Maribor?

Xabi Alonso: How I felt when Liverpool drew Real Madrid in Champions League