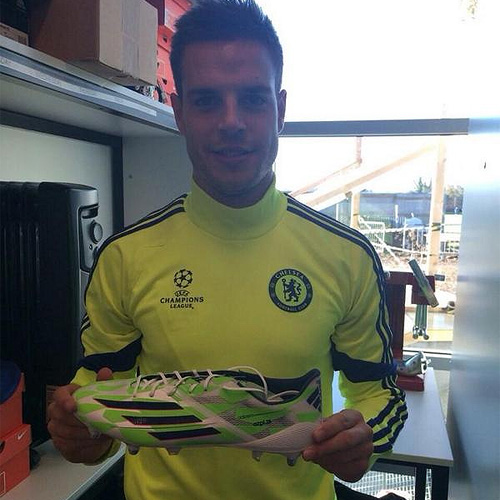 Cesar Azpilicueta will be sporting his new boots if Jose Mourinho selects the Chelsea defender for their clash against Maribor on Wednesday night.

The Spanish defender hasn’t featured for the Blues since his first-half sending off during a 2-1 victory over Crystal Palace at Selhurst Park last month.

But the 25-year-old full-back will be hoping to give his new footwear a debut run out as Chelsea take on their Slovenian opponents in the Champions League.

Filipe Luis has made the most of Azpilicueta’s indiscipline after the Brazilian was selected at left-back for Chelsea’s last two league games.

The Spain international has been a regular fixture in Jose Mourinho’s side since dislodging Chelsea legend Ashley Cole last season.

Azpilicueta helped Chelsea to win the Europa League during his first season at Stamford Bridge after he moved to London from Marseille in 2012.

What do you think of Azpilicueta’s new boots?

Photos: Costa and Mourinho all smiles in Chelsea training session