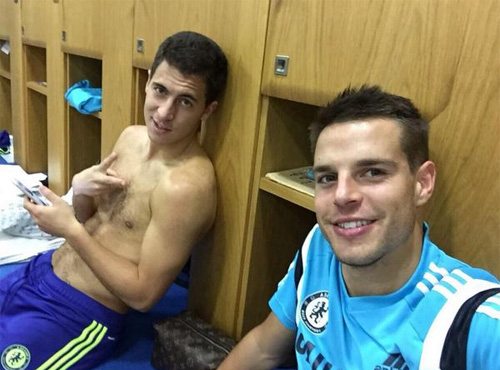 The Blues were put through their paces at their Cobham training facility as Jose Mourinho assessed his squad ahead of their clash against Maribor in the Champions League on Wednesday.

And Chelsea defender Azpilicueta posed for a photo with Blues team-mate Hazard, who looked particularly smug after his impressive start to the season.

Chelsea forward Hazard has been in fine form this term, scoring five goals in 15 appearances in all competitions.

The Belgium international bagged a brace as the west London side racked up a 6-0 victory over Maribor in the reverse fixture last month.

The Blues can qualify for the knockout stage if Mourinho’s men beat Maribor and Sporting Lisbon fail to secure victory over Schalke.

‘Alexis Sanchez and Danny Welbeck is a formidable Arsenal partnership’

Olivier Giroud could struggle to get into Arsenal side, says Spurs legend