Filipe Luis, Willian and Ramires are in good spirits after Chelsea training on Monday 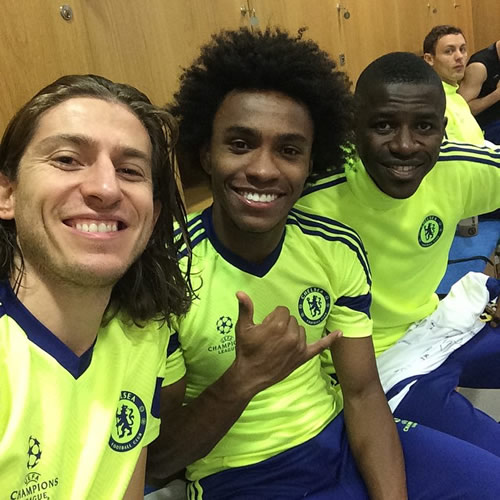 The Blues were put through their paces at Chelsea’s Cobham training base ahead of their Champions League clash with Schalke in Germany on Tuesday night.

Luis posted the picture above on his Instagram account, and also just about managed to squeeze Nemanja Matic into the shot.

The west London side played Schalke in last season’s group stage, with Chelsea winning 3-0 in Germany and at home.

The sides also faced off in the 2007-08 group stage, with Chelsea 2-0 victors in London, Didier Drogba scoring the second, before a goalless draw in Germany.

Roberto Di Matteo, the manager who led Chelsea to their 2012 Champions League triumph, now stands in the way of the London side’s attempt to secure their place as Group G winners.

Schalke appointed Di Matteo as coach on 7 October following the departure of Jens Keller. It is the Italian’s first role since leaving Chelsea in November 2012.