Oscar is joined by Ramires, Diego Costa and Cesar Azpilicueta for a selfie 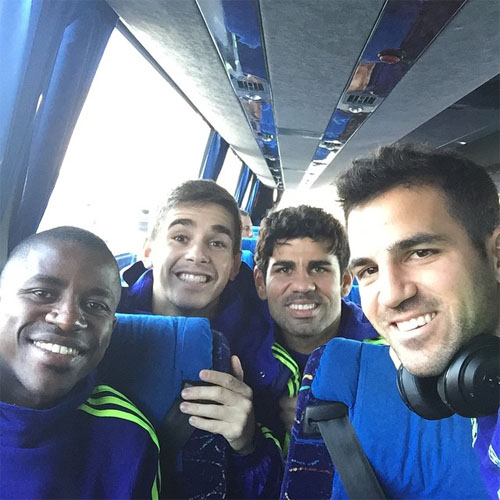 Oscar, Ramires, Diego Costa and Cesc Fabregas were in good mood earlier on Monday when the Brazil forward snapped a photo of the quartet on the Chelsea coach.

It is no surprise considering the west London side’s seven-point lead at the top of the Premier League after a 2-0 victory over West Bromwich Albion on Saturday.

Jose Mourinho’s side face Bundesliga outfit Schalke, who are managed by former boss Roberto di Matteo, in the Champions League on Tuesday night.

And Oscar and his team-mates appeared very relaxed as the 23-year-old playmaker posted a selfie to his Instagram mid-journey.

The Brazil international has scored three goals in 10 Premier League appearances for the Blues this season.