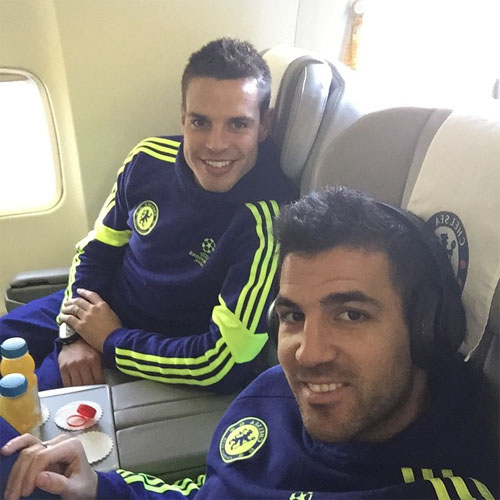 Cesc Fabregas enjoyed some music with “legendary” Cesar Azpilicueta as Chelsea travelled to Germany ahead of their clash against Schalke on Tuesday.

The Spain international, who is a Beat By Dre ambassador, looked relaxed as he posed for a photo with his compatriot ahead of their flight.

“With the legendary @cesarazpi listening to some music,” Fabregas wrote on Instagram.

Fabregas has scored one goal and made 10 assists in 12 Premier League appearances following his £27m move to Chelsea from Barcelona in the summer.

The 27-year-old claimed that he has never enjoyed a football match as much as Chelsea’s 2-0 win over West Brom on Saturday.

“I don’t think I am exaggerating if I don’t remember playing and enjoying a football match as much as I did personally in the first half,” Fabregas said.

“We played outstanding football. It is always difficult after internationals because the team doesn’t have time to work on many things and prepare the game but I enjoyed it a lot, particularly the first 45 minutes.”