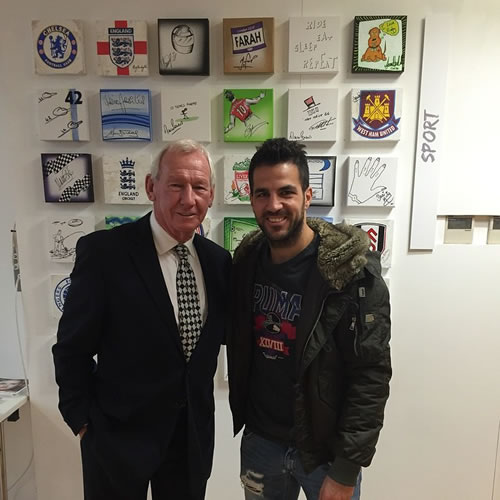 Cesc Fabregas was all smiles as he posed for a picture with Arsenal goalkeeping legend Bob Wilson this week.

The Chelsea midfielder, who spent eight years at Arsenal before leaving for Barcelona in 2011, was helping out with Stars on Canvas, a charity auction in aid of Willow.

Fabregas posted the picture above on his Instagram account and wrote: “Took part in #StarsOnCanvas for @willow_fdn + @bobwilsonbwsc Auction to 23 Nov @ starsoncanvas.org.uk & at HeddonStreet @RegentStreetW1 great to see you again Bob.”

The 27-year-old midfielder has been one of the Premier League’s standout performers since his transfer to Chelsea from Barcelona in the summer.

Fabregas, who pulled out of international duty with Spain this week with a groin injury, has made nine assists and scored one goal in 11 top-flight appearances for Jose Mourinho’s men so far this term.

Chelsea are currently unbeaten in all competitions this season and are four points clear at the top of the Premier League table.

Who has Cesc Fabregas played better for?