Photo: De Gea and Rooney all smiles on Man United train after win over Arsenal 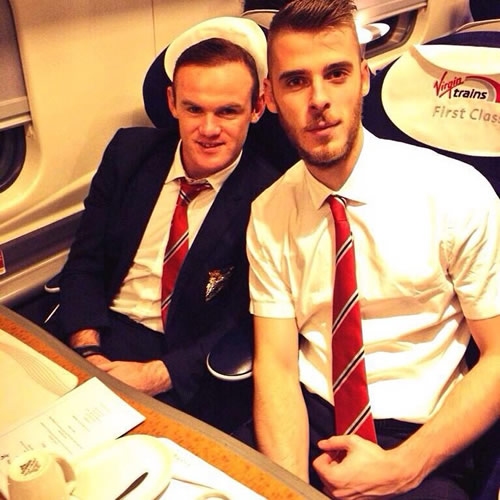 David De Gea and Wayne Rooney were all smiles as they posed for a picture on the train back up north after Manchester United’s 2-1 win over Arsenal on Saturday.

The Red Devils moved up to fourth place in the table thanks to the victory at Emirates Stadium, while Arsenal dropped to eighth.

Goalkeeper De Gea posted the picture above on Instagram and wrote: “Back home with 3 important points and a great player that never misses, @waynerooney #MUFC.”

Kieran Gibbs deflected Antonio Valencia’s shot into his own goal 10 minutes after the interval.

Rooney then added a second with a chipped finish in the 85th minute to put United in control.

Arsenal striker Olivier Giroud marked his comeback from a broken leg with a stunning left-footed strike in stoppage time but United held on to secure the three points.