The Chelsea captain has made another fan's day 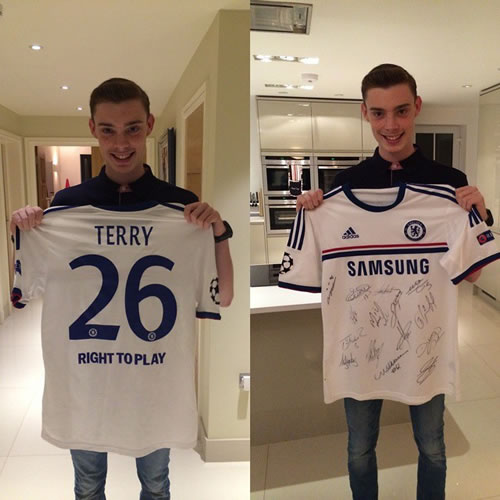 John Terry has once again underlined his brilliant relationship with Chelsea supporters by making another fantastic gesture to one lucky fan.

The 33-year-old surprised Blues supporter Harry Richards with a signed shirt after his girlfriend got in touch with the Chelsea captain on Instagram to ask him for a birthday message.

Richards posted the picture above on Instagram and explained how the surprise unfolded.

He wrote: “My amazing girlfriend spoke to JT on instagram and told him my love for Chelsea.

“As it was my birthday coming up JT was kind enough to send me his match worn shirt with the squads signatures. It was more than what @bethevansbrown asked for which was just a simple happy birthday message (which he also did).

“I honestly cannot be thankful enough to someone who is a legend at this club and is a fan of CFC himself. To get this from my favourite player ever was a dream come true and I cannot show how grateful I am to the squad and JT especially for this amazing gift.

“I will continue to support the mighty chels the rest of my life and things like this make me feel so grateful. Thankyou John! I cannot thank you enough! @johnterry.26 #cfc #chelsea #captainleaderlegend.”

The gesture comes after Terry recently sent a heartfelt message on the photo-sharing app to a fan who lost her mother.

What do you think of John Terry?

Photos: Balotelli and Sterling all smiles as Liverpool train ahead of Madrid tie