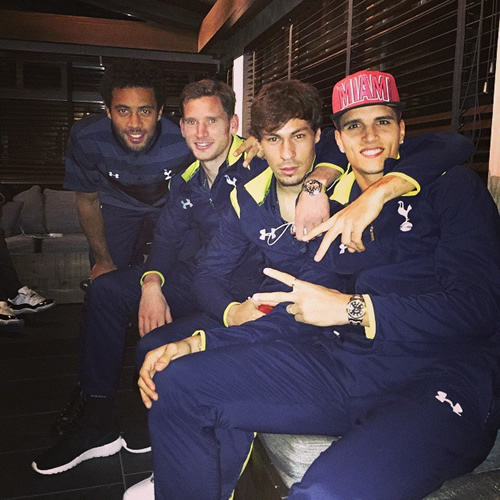 Erik Lamela was all smiles as he posed for a picture with Moussa Dembele, Jan Vertonghen and Benjamin Stambouli ahead of Tottenham’s clash with Asteras Tripoli on Thursday.

Tottenham head into the game after having beaten their Greek opponents 5-1 at White Hart Lane a fortnight ago.

Lamela posted the picture above on his Instagram account and wrote: “With @mousadembele @jvertonghen @benjaminstambouli getting ready for tomorrow. #coys #europaleague #tottenham #spurs.”

Spurs have not won in three previous visits to Greece in European competition.

Defender Federico Fazio is expecting a tough match, despite the thrashing in north London last month.

“We can take confidence from the first match, but we know it will be very difficult, very close,” said Fazio.

“Maybe the result of the last match was slightly harsh on Asteras because they played well and they have a good team.”

What is Erik Lamela better at?