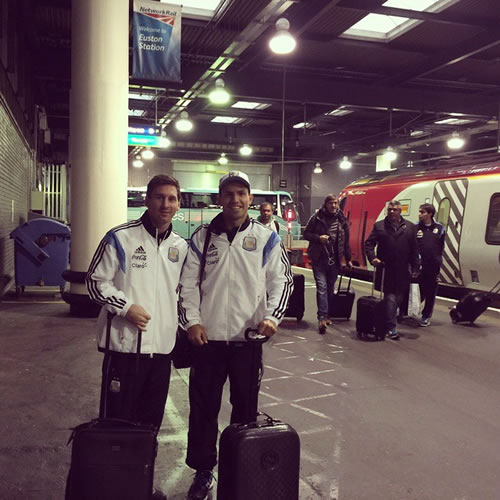 Lionel Messi was all smiles as he posed for a picture with Sergio Aguero at London’s Euston station on Thursday afternoon.

Messi scored his side’s winner from the penalty spot as Argentina sealed a 2-1 victory over Croatia at Upton Park on Wednesday night.

Messi appeared alongside the Manchester City striker at Euston as the Argentina squad prepared to travel up to Manchester by train.

The four-time Ballon d’Or winner posted the picture above on his Instagram account and wrote: “London. Next stop ???”

Aguero then shared the same photo on his Twitter account and wrote: “From London to Manchester by train. C’mon @Argentina !!”

Messi, 27, has scored seven goals and made seven assists in La Liga for Barcelona so far this season.

Argentina’s next game is a friendly clash with Portugal on 18 November.

‘Only Lionel Messi and Cristiano Ronaldo better than Chelsea star’

Chelsea transfers: Petr Cech speaks out about his future