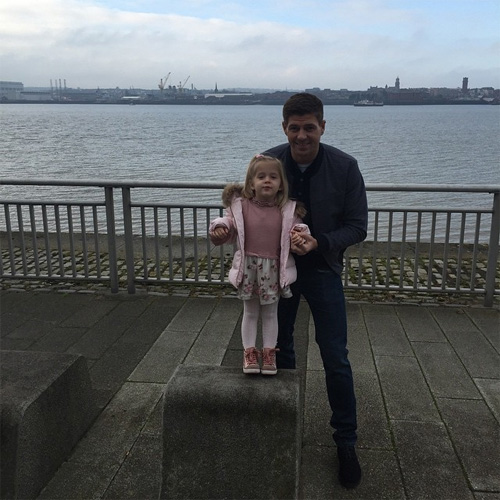 Steven Gerrard has plenty of spare time on his hands during international breaks after he announced his England retirement following a disappointing World Cup in Brazil.

The 33-year-old skipper finished one appearance short of David Beckham’s outfield record of 115 caps, while Peter Shilton holds the record with 126 Three Lions games to his name.

The talismanic midfielder has endured a difficult start to the season, like his beloved Liverpool, as the Reds find themselves in 11th place in the Premier League table.

But the Liverpool captain looked relaxed as he posed for a photo with his youngest daughter Lourdes next to the River Mersey on Saturday morning.

“Had a lovely stroll with Lourdes this morning along the River Mersey,” Gerrard wrote on Instagram.

Gerrard won’t be in action again until Liverpool make the trip to Crystal Palace on 23 November.

The experienced Reds captain has scored two goals and made one assist in 11 Premier League appearances this season.