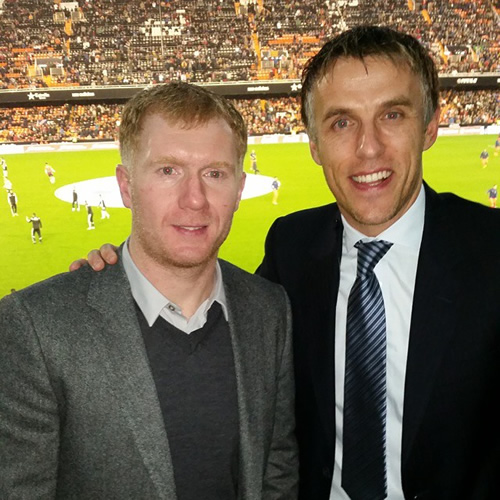 The ex-Red Devils were at the Mestalla as Sergio Busquets’ stoppage-time goal earned Barca a 1-0 away victory.

Neville posted the picture of the pair above on his Instagram account and wrote: “With the maestro at valencia vs barca.”

Ex-midfielder Scholes has been making the headlines as a pundit since hanging up his playing boots. He recently questioned Liverpool’s progress under manager Brendan Rodgers, pointing to the club’s summer signings as one of the reasons for their struggles this season.

Scholes told the Independent: “To go to the next level, Liverpool needed two top-quality signings but they have not been able to get those players and so the momentum that they built over the course of last season has been lost.

“Instead of challenging at the top of the table, they find themselves losing to Crystal Palace and taking Champions League second round qualification down to the wire. They are going backwards rather than forwards.”

Photos: Lamela and Soldado react to Tottenham’s win over Everton