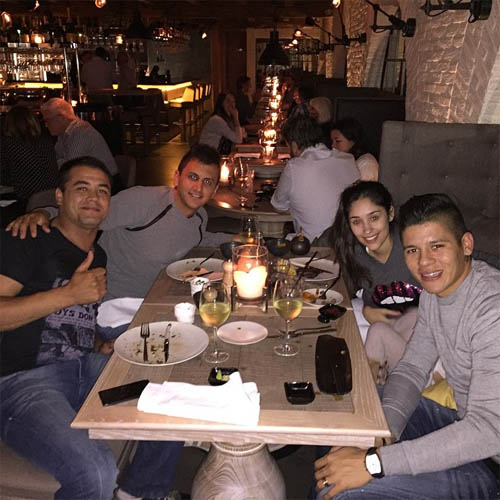 Marcos Rojo isn’t expected to feature for Manchester United until next month after the centre-half suffered a dislocated shoulder in the derby.

The Argentina international didn’t require surgery on his shoulder, but the £16m signing is still a few weeks away from making a return to action.

And the 24-year-old took his mind off his current injury woes after he went for dinner with his Eugenia Lusardo and two friends on Wednesday night.

“Finishing dinner with vague @ tatoacevedo11 germanpoggio and my eugelusardo loves and who hid more !!” Rojo wrote on Instagram.

Earlier this week, Rojo gave United supporters an update on his fitness status after his injury during the 1-0 defeat by Manchester City.

Rojo has made seven Premier League appearances following the defender’s £16m move to United from Sporting Lisbon in the summer.