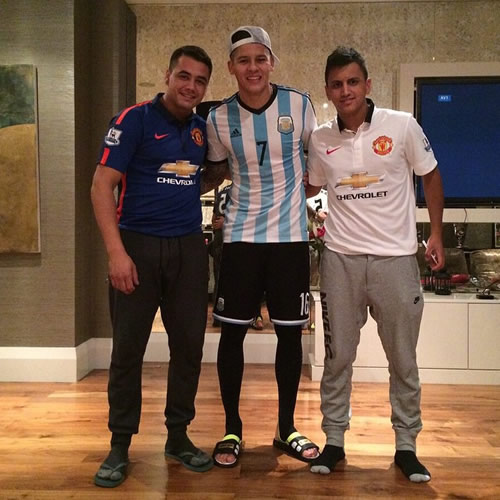 Marco Rojo was all smiles after making his comeback from a dislocated shoulder in Manchester United’s 3-0 win over Hull City on Saturday.

The centre-half played the full 90 minutes as Louis van Gaal’s side secured victory at Old Trafford.

Rojo was pictured with two of his friends and donned Angel di Maria’s number seven Argentina shirt in support of his international team-mate, who suffered a suspected hamstring injury early on in the game.

Rojo posted the picture above and wrote: “Great win, now at home with friends to rest with Di Maria’s shirt #fuerzaAngel!! With @tatoacevedo11 and @germanpoggio.”

The win kept United in fourth place in the Premier League table.

Ander Herrera also took to Instagram to praise the performance after the game, writing: “Another step in right direction! Let’s keep going! Thanks to supporters for man of match vote. Good team performance!”