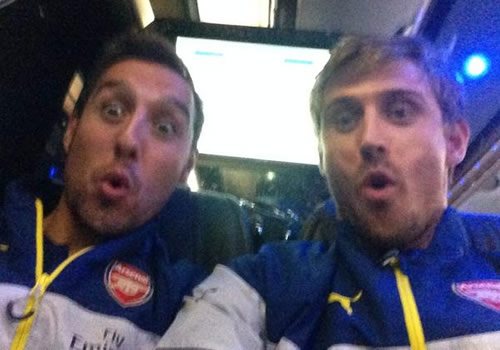 Nacho Monreal and Santi Cazorla were all smiles on the Arsenal team bus after Saturday’s 1-0 win over West Bromwich Albion.

A brilliant piece of play from Cazorla set up Danny Welbeck in the 60th minute, with the England striker heading home to seal victory for the Gunners.

Monreal posted the picture above on his Twitter account and wrote: “That was our face after seeing the replay of the goal!!”

Aaron Ramsey also took to the social network after the game, writing: “Buzzing to get a win today, boys were fantastic! #afc #team.”

As did unused substitute Lukas Podolski: “Great victory today: 3 points in the bag! FANtastic fan support!! Thanks! On the way back to London now, have a great weekend everybody!”