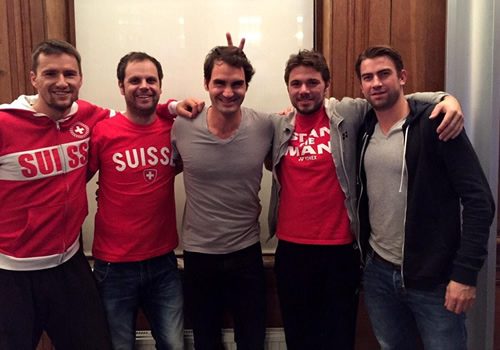 Roger Federer appeared to be in good spirits as he posed for a picture with Stan Wawrinka and the rest of the Swiss Davis Cup team on Monday night.

Federer and Wawrinka were reported to be involved in a heated argument after their semi-final battle at the ATP World Tour Finals on Saturday, where Federer prevailed 4-6 7-5 7-6.

Wawrinka was said to be angered by comments made in the crowd by his opponent’s wife, Mirka Federer, leading to the pair exchanging words in the gym area after the match.

However, the duo looked relaxed as Federer took to social media to post a picture of the Swiss team as they geared up for their final showdown with France in Lille.

Federer shared the picture above on Twitter and wrote: “It’s great being with the boys again .. And #captain #lüthi.”

Federer was forced to pull out of the ATP World Tour final against Novak Djokovic with a back injury but still hopes to be ready for the Davis Cup clash.

Federer, 33,tweeted on Monday night: “Really appreciate the kind wishes.. It means a lot. Hope to get better soon….”