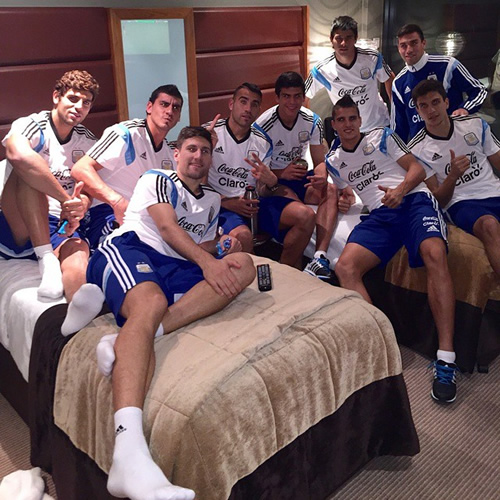 Erik Lamela was all smiles as he posed with a handful of his Argentina team-mates on Monday night.

The Tottenham Hotspur midfielder is in Manchester with his national side ahead of Tuesday night’s friendly clash with Portugal at Old Trafford.

Angel di Maria is set to line up for Argentina at Old Trafford on Tuesday following his club-record £59.7m transfer to Manchester United.

And Argentina boss Gerardo Martino has been quick to play down any concerns about his recent form.

Martino said: “I have to say that Angel is one of the very top players in world football.

“His start was exceptional and the fact that generally when players go to a new club and have to get used to a new league, a new team, a different style of football and different team-mates, I think the form that he is showing now is possibly more typical of a player going to a new club than the very first few games when he burst onto the scene and did so well.”

‘Liverpool have found it tough without Sturridge and Suarez goals’

Arsenal’s Aaron Ramsey hits back at his critics