Willian uploads photo of Chelsea squad flying back to London 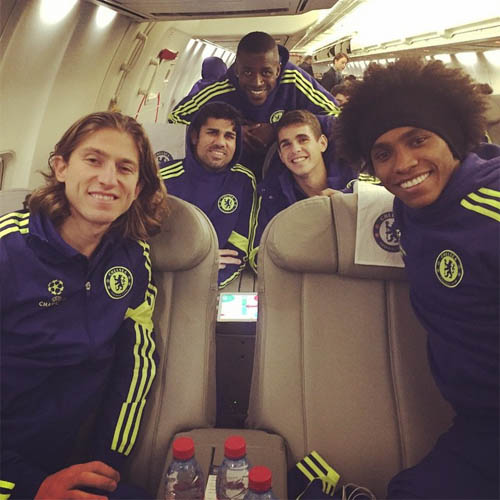 Willian uploaded a photo of Chelsea’s Brazilian stars after the Blues were 5-0 winners against Schalke in the Champions League on Tuesday.

Chelsea captain John Terry broke the deadlock in the second minute and Willian added a second before Jan Kirchhoff netted an own goal on the stroke of half-time.

And the former Shakthar Donetsk man pulled together Chelsea’s Brazil internationals, as well as Brazilian-born Diego Costa, for a photo.

Chelsea sealed their place in the Champions League knockout stage after their five-goal victory over Roberto di Matteo’s side.

The Blues are bidding to win the competition for the second time in the club’s history after Chelsea beat Bayern Munich on penalties in 2012.

Photo: Chelsea captain John Terry ‘delighted’ to get on scoresheet