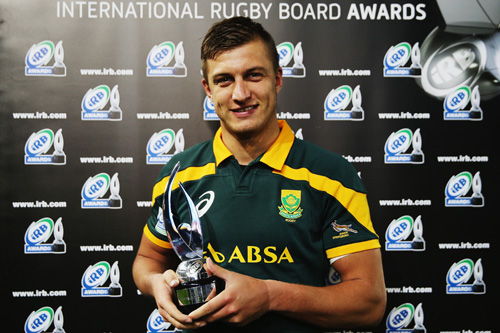 IRB Young Player of the Year Handre Pollard has been dropped to the bench for South Africa’s clash with England at Twickenham on Saturday.

The 20-year-old Blue Bulls outside-half, who has become a Springboks regular since the Junior World Championship in June, is one of five changes made by head coach Heyneke Meyer.

Meyer has handed a first start to Sharks scrum-half Cobus Reinach as the Boks look to get back to winning ways after they disappointed in a 29-15 defeat to Ireland in Dublin last weekend.

Reinach, 24, replaces Francois Hougaard and is joined by provincial team-mate Pat Lambie, who takes over from Pollard at outside-half.

“It’s a big occasion for Cobus, but he would not have been here if we didn’t believe he could deliver the goods, and he’ll be next to his provincial team-mate in Pat,” Meyer said.

“Pat started at Twickenham for us two years ago and did very well. He’s playing well at the moment, and I wanted to give him the opportunity to start.

“Pat is tactically very astute and, even though he’s still pretty young, he’s got a lot of experience.

“We’ve accepted our performance against Ireland last weekend was not up to scratch and everyone in the touring squad has put up their hands and dug deep this week.

“We’ve really worked hard at fixing the mistakes we made and the challenge is now to put that into action on Saturday.”

The final change sees Cheetahs hooker Adriaan Strauss replace Bismarck du Plessis in the front row, who drops down to the bench as Meyer keeps the same match-day 23.

“Adriaan, Schalk and JP have all started a number of Tests this year and they will slot in easily,” Meyer added.

“We decided beforehand that we wanted to start all of these players in one of the first two Tests on tour.

“As usual, we’re also expecting our replacements to raise the intensity when they’re sent on and Bismarck, who had a very good game in Dublin especially in the set-pieces, Oupa, Francois, Cornal and Handre will provide important cover off the bench.”

Johnny Sexton named on IRB Player of the Year shortlist