Sergio Aguero. Gareth Bale and Luis Suarez were recognised as the best players in the Premier League by their fellow professionals in 2013 and 2014. The pair have since moved to La Liga, paving the way for Sergio Aguero to become the league’s golden boy. The 26-year-old has been mentioned in the same breath as Bale and Suarez in the past two seasons, but injuries have prevented Aguero from underlining his undoubted talent. The Argentina has already scored nine goals in nine games after his winner in a 1-0 victory over Manchester United on Sunday. The City striker should eclipse his tallies of 12 and 17 in the past two seasons. If he stays injury-free, Aguero should easily beat the 23 goals that he scored in his first season in the Premier League. Would that be enough to earn him the PFA player of the year? Not if Chelsea win the title thanks to Diego Costa’s goals and Cesc Fabregas’s wizardry.

Southampton (again). It is time to take Southampton seriously. Ronald Koeman is enjoying an extended honeymoon period at St Mary’s after his appointment as Mauricio Pochettino’s successor in the summer. The Saints were tipped to slip up against Steve Bruce’s well-organised Hull City on Saturday, but Koeman’s side left the KC Stadium with three points after Victor Wanyama’s third-minute opener. Sky Sports pundits Gary Neville and Jamie Carragher revealed on their Monday Night Football show that only five per cent of side’s with Southampton’s record after 10 games have finished outside the top six. So the Saints should be improving on last season’s eighth place, it is just a matter of how high up the table they’ll be come May.

Harry Kane. Described by one sports journalist as Tim Sherwood’s gilet in human form, Harry Kane was understandably exuberant when he scored a winner on the stroke of full-time at Villa Park. Tottenham Hotspur manager Mauricio Pochettino was heavily criticised after he omitted the in-form home-grown striker in favour of struggling Emmanuel Adebayor and Roberto Soldado. Unsurprisingly, the Spurs pair disappointed and it wasn’t long before Kane was handed his chance to impress. The 21-year-old gave Pochettino’s side renewed impetus up front and asked questions of 10-man Aston Villa. Kane showcased his growing self-confidence to ignore Erik Lamela’s requests to take the 89th-minute free-kick, although he was a tad fortunate to see his effort deflected past Brad Guzan. If seven goals in seven games doesn’t warrant a start against Stoke City, what does?

“Stupid” Chris Smalling. Louis van Gaal has disappointed so far this season. On the pitch, his United side haven’t hit their stride despite substantial investment in the summer transfer window. Off the pitch, Van Gaal hasn’t quite produced the no-nonsense sound bites that had been promised by the media in the Netherlands, Germany and Spain. But the United manager was in unforgiving mood after the Manchester derby on Sunday, hitting out at Chris Smalling. The England international earned a second booking for a rash challenge, prompting Van Gaal to say: “In a derby you have to be careful – the second yellow card is a stupid yellow card”. Smalling will be frustrated, particularly as he had the chance to earn the trust of the manager and a regular starting place in the absence of sidelined Jonny Evans and Phil Jones.

Liverpool (again). Another Premier League weekend, another disappointing Liverpool result. Have the Reds reached their nadir? Probably not, especially with Tuesday’s game against Real Madrid at Bernabeu followed by the visit of league leaders Chelsea on Saturday. It is going to get worse before it gets better for Brendan Rodgers’s side. Such is the depth of the club’s problems at the moment, former players and pundits can’t decide whether Liverpool’s biggest issue is up front or at the back. Rodgers will hope the return of Daniel Sturridge can help the likes of Mario Balotelli, Philippe Courtinho and Raheem Sterling to improve. Liverpool’s back four, though, appear incapable of keeping a clean sheet as Dejan Lovren and Alberto Moreno take their time to settle, and Glen Johnson continues to regress. Fill your boots, Cristiano. 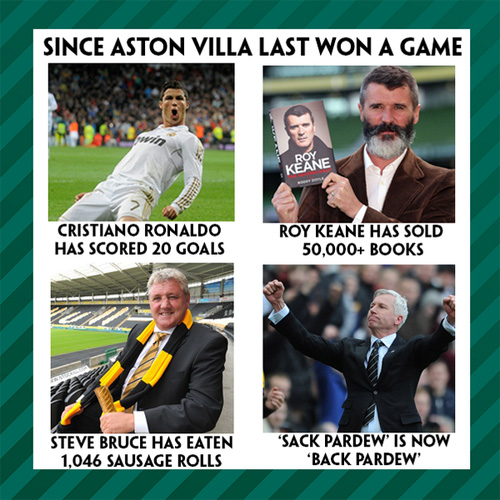 Paul Lambert. Irish bookmaker Paddy Power put together the above image which looked at four things that have happened since Aston Villa last won a game. Real Madrid forward Ronaldo has scored 20 goals, whilst ‘Sack Pardew’ has become ‘Back Pardew’. Let’s put their losing run in context, though. Arsenal, Chelsea and Manchester City would be expected to beat the Birmingham side, and they did, comfortably. Everton and Tottenham represent tricky fixtures, too tricky for Villa. The only result which will truly irk Paul Lambert is their 2-0 defeat by Queens Park Rangers. Facing Harry Redknapp’s struggling side, Villa would have felt three points were a realistic goal. It doesn’t get much easier for Lambert in the coming weeks against in-form sides West Ham United and Southampton.