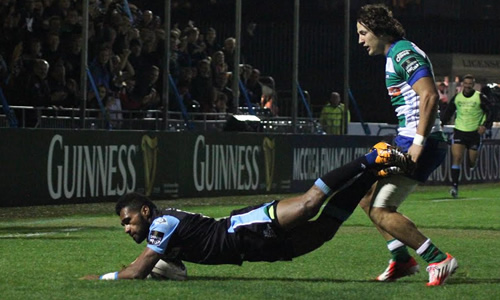 On a night when visitors to Scotstoun Stadium were encouraged to dress up for Halloween, it was a lacklustre match offering few treats on a Friday night that could have done with a bit of dressing up in the shadows of the viagogo Autumn Tests.

As expected, Glasgow Warriors got back to winning ways in the Guinness PRO12 against the league’s bottom club Benetton Treviso, but the only try in the 17-9 win came from Warriors scrum-half Niko Matawalu after 19 minutes, with outside-half Peter Horne adding a brace of penalties in both halves as persistent rain stifled any hope of free-flowing rugby.

Scotland international Richie Vernon returned from injury to form a new centre partnership with former Munsterman James Downey in the Warriors midfield and the former back-row forward was pleased to get through the game.

“It was just good to get back out there playing to be honest,” he said.

“It was one of those games. It was stop-start so it was quite hard to get into the flow of the game, but the biggest thing for me is just coming through it and my fitness felt fine, my Achilles felt fine, so it was just good to be back playing and hopefully I can play a few more games over the next couple weeks, but it’s quite frustrating because we’ve got a break now.

Both clubs admitted the weather played its part in the way the game played out and, for the Warriors, Vernon conceded they struggled to adapt to the conditions, but were happy to come away from a close game with a win and can look to improve over the next two weeks.

“I think it was a mixture of that and they’re really competitive at the breakdown – that’s something we highlighted before the game.

“We need to look at and counteract because if teams disrupt our ball, we can’t play the sort of rugby that we want to play.

“At times, we just didn’t get going, couldn’t get into our game and we kept losing the ball first, second phase, so we’re aware we’ve got a lot of things to work on, especially through the next couple weeks.

“They came over to play a game and we couldn’t get our game going. They were strong at the breakdown, so we couldn’t play the sort of flowing rugby that we like to play, but when it got to 11-9 we came back at it well, exited well and, in the end, we ground out the win.

“In the end, we’re happy with a win against a tough Treviso team that have gone well the last few weeks.”

The remaining Warriors who aren’t involved with the Scotland, Canada or Fiji squads for this month’s autumn internationals now have the luxury of a rare week from Warriors head coach Gregor Townsend before they turn their attention to a tricky PRO12 outing in three weeks’ time.

On last night’s showing, it is what the Warriors squad and BT Sport Academy players need with a difficult trip to Llanelli to take on the Scarlets on 21 November, and Vernon admitted they’ll need to be at their best to leave West Wales with a win.

“That’s a really tough game,” Vernon said. “Gregor spoke to us there and said we’ve got a recovery week then we’re back in and he’s called it an ‘improvement week’.

“We’ve got lots of stuff that we definitely need to improve on to get a result down there because it’s a really tough place to go, but one that we’ll definitely target, and we’ll need to play at our best to get that victory that we want.”