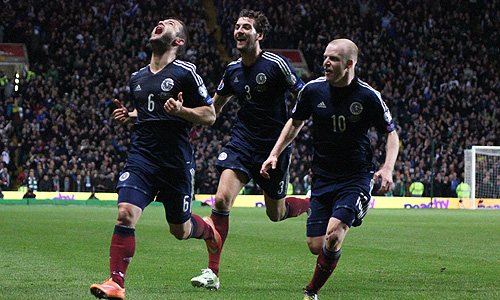 A whole lot of noise about nothing

The media build-up to this 2016 European Qualifier had started a week earlier with various media outlets playing on the numerous subplots attached to this fixture. In truth, the fans of both teams having being waiting to lock horns with one another for months. Scotland v Ireland in Glasgow is a genuine international derby with the two Celtic nations meeting for the 10th time with plenty on the line this time around, as both have genuine chances to qualify for France in 2016 following positive starts in Group D. The two teams arrival on the pitch was greeted by a wall of noise as the 55,000 fans in attendance cranked up the volume and provided an atmosphere worthy of any international derby. Amhran na bhfiann and Flower of Scotland were sung with such pride and gusto one expects from proud Scots and Irish. Then the match started, and it was pretty bad from a footballing point of view. It seemed the Scots and Irish were more content on kicking one another. You can forgive one half of bad football, or lack of. But when Serbian referee Milarad Mazic blew his whistle for the second half, it proved to be another tepid affair of football, with the Irish employing a hopeless long ball tactic. Shane Long was replaced by Hull City’s Robbie Brady after the hour mark as Ireland attempted to flood the midfield and leave Glasgow with a point. Games such as this are often won from one instinctive moment of magic. Current Celtic captain Scott Brown worked well Shaun Maloney, his clever back-heel evading the Irish defenders and allowing the Wigan player to let loose a rocket of shot that beat David Forde. It was the one moment the made it all worth it for the 50,000 Scots or so, who serenated their team throughout with “Flower of Scotland” and “We’ll be coming”. For the loyal Irish, it all ended a wee bit flat, despite their best efforts and all the noise they brought to the party, their players went out with a complete whimper.

With the game staged at Celtic Park last night it provided a homecoming for many of the players and management from both camps. Scotland manager Gordon Strachan and his Irish counterpart Martin O’Neil both managed Celtic, with O’Neil one of the most popular and respected mangers in Celtic’s history. The Irish manager’s No2 Roy Keane played for Celtic, as did Irish record goal-scorer Robbie Keane, both played for Strachan. Scotland had its fair share of past and present Hoops. Cardiff City shot-stopper and Scotland No1 David Marshall made his name at Celtic under O’Neill. The main focus of attention was of course Irish winger and former Hoop Aiden McGeady. Now playing with Everton, McGeady was subject to a lot of negative publicity prior to the game, citing his decision to pledge allegiances to the Republic of Ireland as oppose to Scotland, the country of his birth. Naturally his every touch was hissed and booed by the Scots, while the official pocket of 3,000 Irish did they best to try and support him. The Scottish players gave him a rough time upon his return to Glasgow, never letting him settle on the ball as he came out on the wrong end of many tasty challenges. It was yet again another former Hoop that stole the show on the night as former Celtic Park favourite Shaun Maloney finished off a brilliant team effort goal to make himself a hero to the Tartan Army. Speaking after the game, Maloney said: “It’s a big result for us, it’s a special moment for myself and the team, we are just fortunate to be on the right side of the result”.

What this result means for Group D

Germany and Poland both had 4-0 victories over Gibraltar and Georgia respectively last night. Poland were the real winners, though, as they top the group after four games. The Poles are sitting three clear of Germany on seven points. Scotland, followed by Ireland in fourth are also on the same points tally as the Germans, but head-to-heads will undoubtedly play a major role in deciding this group. Next up for Ireland is a pivotal home tie against Poland in March, while Scotland will entertain minnows Gibraltar. After the game, O’Neill said: “We are naturally disappointed, we have to get ourselves together. We need to be ready for Poland in March. We are absolutely still in this”. Strachan called it how it was, “as for a footballing spectacle of pure football, it wasn’t that great, but as a spectacle of two groups of players not wanting to give an inch, it was mesmerising. The fans made it an occasion”.