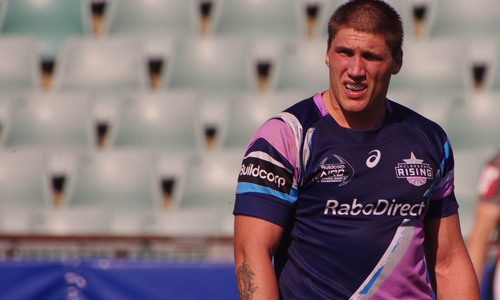 Sport has a good knack of throwing up remarkable stories when it comes to achieving dreams, whether or not glory is achieved.

It can be so universal that there are stories all over the sporting world and another will join them as the new Millennium Stadium pitch gets its first going over by Wales and Australia on Saturday, in what is essentially a warm-up for next year’s Rugby World Cup clash.

Step up Melbourne Rebels flanker Sean McMahon. The 20-year-old may not be aware that he will be competing for the James Bevan Trophy, awarded to the victors of the clash since 2007 and regularly residing in Australia since, when he makes his Test debut in the Welsh capital.

He can be forgiven for not being fully aware of what he’s involved in, or how long it has been since Wales last defeated Australia (or any southern hemipshere side for that matter). He was, after all, planning to spend the Australian spring in Mexico with his Rebels team-mates rather than wearing the famous green and gold. Plans now cancelled, the Brisbane native has already racked up plenty of airmiles in his relatively short career as a professional rugby player.

Turning professional at 17, McMahon may not be well known across the UK and Ireland, but he is the poster boy of the Australian Rugby Union’s Pathways program and has been storming his way through domestic rugby.

After two years playing on the HSBC Sevens World Series with the Australia 7s team, McMahon was signed to the Rebels’ Extended Playing Squad in December 2013, not necessarily guaranteed playing time, but he made his Super Rugby debut in February. By April, the Queenslander was offered a new two-year deal. Thirteen Super Rugby appearances later and his stock had risen immeasurably.

As his performances continued with the Rebels, he was selected for, and chosen to captain, the Australia U20 side at the 2014 Junior World Championships in New Zealand in June. No trophies here, but there was some tough opposition. They finished fifth as England eventually defeated South Africa in the final.

Despite his busy 15s schedule, McMahon even found time to travel round the world to Scotland to join the Australia 7s team at the 2014 Commonwealth Games in Glasgow. He returned home with a bronze medal.

Back to domestic matters in August and the NRC. McMahon rampaged his way through the Buildcorp National Rugby Championshi with Melbourne Rising as they secured the overall top spot unbeaten in their eight matches before losing in the semi-finals.

That’s quite the haul for a 20-year-old in his first season in 15s rugby, and so to international affairs and another chance to impress for a man who admits he loves a competition and will give anything a crack.

In his first senior Wallabies appearance, McMahon found his way on to the scoresheet in an entertaining 40-36 win over the Barbarians at Twickenham last week, and his performance was enough to convince head coach Michael Cheika to throw him against Wales at the Millennium Stadium to earn his first Test cap.

“Going into the Barbarians match it was made clear that players had an opportunity to push their way into the Test team with a strong performance,” Cheika said.

“Sean made the most of his opportunity and brought great work-rate and physicality to our game.

“This selection also recognises the outstanding year he has had at all levels of the game, and he thoroughly deserves the chance to debut for Australia.”

He isn’t the only uncapped player in the Australia squad, but McMahon is the one who will be more noticeable than Western Force prop Tetera Faulkner, who starts on the bench. Going up against a British and Irish Lions back row of Dan Lydiate, Sam Warburton and Taulupe Faletau should go some way to proving how ready he is for Test rugby.

Australia go into the match as favourites, having won eight consecutive meetings between the two countries since Wales won 21-18 at the Millennium Stadium in November 2008, but Sean McMahon can be forgiven for not knowing those details, and if it doesn’t quite go to plan, there’s always next year’s Rugby World Cup, by which point he will have had another season of Super Rugby behind him and a few more cracks at more experienced internationals along the way.